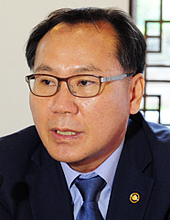 The newly appointed head of the state-run Cultural Heritage Administration (CHA), Kim Jong-jin, met with media for the first time on Thursday and said he feels pending issues have accumulated at the administration since he left as deputy head in 2016.

Regarding the recent controversy surrounding the royal seal of King Deokjong (1438-57), a copy that was reproduced in 1924 when Korea was under Japanese rule (1910-45), Kim said he believes the problem was that the officials were not professional when dealing with this issue.

“I don’t think it was an institutional problem but a problem of the officials’ attitude towards their work,” said Kim. “We’ll start off with a clean slate and a greater sense of responsibility.”

Recently, the CHA was embroiled in controversy after it made a grand announcement two years ago that the original seal, created in 1471, was finally coming from the United States after being lost in the 1950-53 Korean War.

But it only revealed that the royal seal was a reproduction on Aug. 18, one day before kicking off an exhibition to display 12 royal seals that have been returned to Korea since 2014 at the National Palace Museum in Gyeongbok Palace in central Seoul.

“Many of Korea’s valuable treasures were stolen and lost during the Korean War and were reproduced during the Japanese colonial period,” Kim said, emphasizing that although the seal is a reproduction, it was remade at the order of King Sunjong (1847-1926) and has been officially recognized as a royal seal and kept in Jongmyo Shrine in central Seoul. Kim also said his goal is to continue to develop and share the value of our cultural heritage with the general public.

“There are so many stories that can be told about our cultural heritage,” he said, “and we’ll try to share it with as many people as possible by creating interesting cultural content.”