Change to CSAT stalled to get Moon administration input

Change to CSAT stalled to get Moon administration input 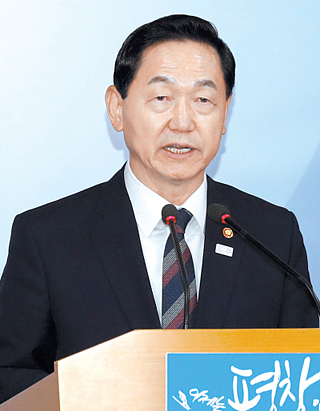 An overhaul of the national college entrance exam will be delayed by one year and the new system will be introduced in 2022.

Kids currently in the eighth grade will be the first to take the new test.

The Ministry of Education announced Thursday it will conduct additional research and solicit more public opinion before presenting a new set of college admission policies next August.

“We did our best to create a revision plan to reflect the education philosophy of the Moon Jae-in administration, but there was a limit to establishing a national consensus during such a short period of time,” Kim Sang-gon, deputy prime minister for society and education, said in a press conference.

“Instead of pushing forward a premature decision, we decided to delay the timeline to come up with a pragmatic alternative.” In March 2016, under the presidency of Park Geun-hye, the ministry started looking into changing the College Scholastic Ability Test (CSAT). Changes were to be applied starting in 2021.

After Park was removed from office and Moon took office in May, the ministry continued with the plan. Two CSAT revision proposals were announced on Aug. 10, and the ministry said it would make a final decision on Thursday after feedback from the public.

The first proposal was to end grading on a curve for most subjects except Korean language and literature, mathematics and an elective subject. A second option was ending the curve for all subjects and grading them absolutely.

Four public hearings took place over the past weeks and the ministry discovered that public opinion was sharply divided over the changes. The results of public opinion polls varied drastically depending on who conducted them and who was surveyed.

In one survey of parents conducted by a conservative civic group, 77.8 percent said they wanted no change in the CSAT scoring system.

As a split was evident, 5,500 high school teachers from around the country issued a joint declaration demanding a new CSAT revision plan. Civic groups also increasingly demanded that the ministry delay the change.

The ruling Democratic Party was alarmed by the situation as Moon’s approval rating was being affected by the education policy.

According to a Gallup Korea’s survey on Aug. 17 evaluating Moon’s 100 days in office, his foreign and welfare policies were backed by 65 percent of respondents. His education policy, however, was backed by only 35 percent.

“There is nothing for us to gain by prematurely pushing forward the change ahead of next year’s local elections,” a Democratic Party official said. “The ministry made up its mind to delay the change starting last weekend.”

As concerns grew, Moon also stressed the importance of public opinion. When the ministry reported to him Wednesday about its projects for the rest of this year, Moon said, “The people are deeply interested in education policy, so the controversy is destined to be strong. It is, therefore, important to win the consensus of the parents.”

In September, the Moon administration will launch a national education conference that will discuss the overall direction of the new government’s education policy, and it will offer advice on the changes to the CSAT. A forum of high schools, colleges, parents and the government will also be formed to collect opinions.

The new plan to be announced next August will include more than just changes to the CSAT grading system. According to the ministry, a massive overhaul of the public education system and college admission system will take place.