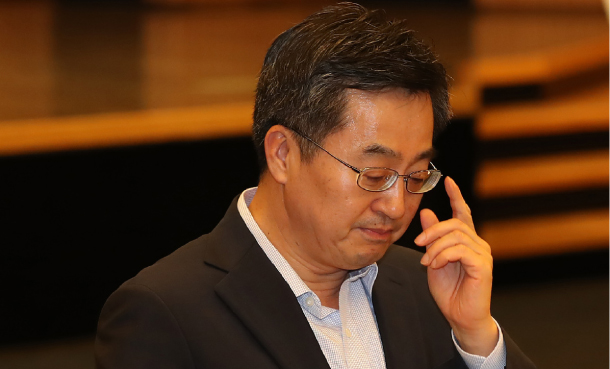 Finance Minister Kim Dong-yeon at a meeting on Aug. 2 about changing the tax code. [WOO SANG-JO]

A friend of mine is the president of a financial company. I don’t know his exact salary, but it must be huge because he has led a couple of financial companies over the past decade. He is probably one of the top 40,000 people whose annual salary is higher than 500 million won ($445,000).

One day, he started complaining to me about President Moon Jae-in’s plan to raise taxes on wealthy individuals and large conglomerates. “If the income tax rate goes from 40 percent to 42 percent, it doesn’t simply mean a 2 percentage point increase,” he said. “If you take into account various payments and state health insurance premiums, about a half of the income is gone.

He had a few more complaints. “About half the nation is not paying taxes,” he said. “Why do I have to make their ends meet by working hard? No matter what I do, no one in this society respects high-income earners. What about my passion, efforts and hard work for the past 30 years to earn this income?”

I understand his point, but I do not agree with it. An annual salary of 500 million won is something I have never dreamed of, and it is not something I can hope for in the future. I am a capitalist, but I also have a left-leaning belief deep in my heart that he who earns more ought to pay more. “How about writing an opinion piece in a newspaper?” I asked him. “I want to keep this job longer,” he replied.

Perhaps that was when I began to pay special attention to the word “super.” When Moon first talked about “super” high-income earners and “super” rich companies in July, I thought it was a little strange. I wondered if he had added the term in order to make an emphasis. Did he really want to create division between the rich and working class?

When corporate tax rates increase, the returns for shareholders and laborers, not the company owner, decrease. Why do we need to use honor and respect? He must have felt embarrassed to call the measure the “rich tax.”

I believe the desire for money and power is a basic human instinct. Adding “super” in front of rich is an indication of anticapitalist sentiment that the rich are sinners. Slapping the labels of “honor” and “respect” is a poor attempt at deception. Of course, it is the government and ruling party who have said that the rich should be more generous and redistribute income.

So here is my proposal. Let’s use the word “super” in front of politicians and senior officials. Let’s allow them “honor” and “respect.” Let’s give the “super” powerful politicians the same opportunities to fulfill the social duty of “redistribution of power,” just like super rich companies and super wealthy individuals. It is unfair to offer praises of honor and respect to money while giving no special treatment to powerful politicians and officials. They will feel honored if we do.

First, officials who are higher than level one, or director-level civil servants in the central government, should be called “super” powerful public servants. A special punitive system should be introduced in which the punishment for drunken driving is a 10-year ban on civil service, and if they abuse their power, they should be fired. Ignoring a civil petition should be punished with a cut of one year’s salary. Lawmakers with more than three terms and heads of political parties should have the title “super ultra” powerful politicians. If they make a slip of the tongue, they must be permanently banned from running in elections to keep their honor.

And of course, the president must be given far more special treatment. Under this government, the system of honor and respect must never apply to ordinary people, because that is the philosophy of the Moon administration.