After ruling, law may redefine the basic wage

After ruling, law may redefine the basic wage 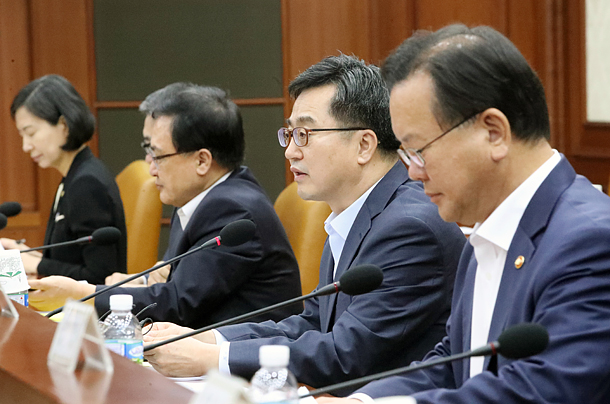 Finance Minister Kim Dong-yeon, second from right, speaks at the ministers’ meeting at the government complex in central Seoul on Friday. [YONHAP]

After a court Thursday ordered Kia Motors to cough up some 400 billion won ($356.36 million) as compensation to its workers, Korea’s top financial official said the government will revise the law to clearly define a worker’s basic wage, the crux of the legal case.

“The government will support [companies] to reform their wage systems,” said Kim Dong-yeon, Minister of Strategy and Finance, on Friday in a meeting with economy-related ministers at the government complex in central Seoul.

“The government will also push for a revision of the Labor Standards Act to clearly define the legal scope of the basic wage.”

The basic wage, or ordinary wage, is the basic salary that is used to calculate benefits, including overtime payments and severance.

Kim’s remarks came a day after the Seoul Central District Court ruled that regular bonuses should be included in the basic wage.

Over 100 companies in Korea are involved in similar litigation with their workers. Wednesday’s decision could set a precedent.

Kia’s litigation started in Oct. 2011, when its labor union sued the company claiming regular bonuses should be included in the basic wage and asked the company to make up for unpaid that would have comes from adding the bonus to the basic wage. The unions demanded Kia pay 1.1 trillion won, but the court slashed the amount to 422 billion won.

The ruling will be appealed, but if Wednesday’s decision becomes the final ruling, the total amount of compensation that Kia will have to pay will be around one trillion won, which includes the 422 billion won ordered by the court as well as for the period since Nov. 2011.

If the basic wage is redefined, the total amount of back pay companies may have to pay nationwide could be as much as 22 trillion won in the worst scenario, according to the Korea Labor Institute.

The Federation of Korean Industries, which represents Korean conglomerates, called on the government to canvas opinions from interested parties and clarify the definition and scope of the basic wage by law to prevent companies being slapped with unexpected costs.

The Korea Automobile Manufacturers Association, which represents Korean automakers, said an administrative guideline set by the Ministry of Employment and Labor in 2012 should be established as law. The guideline stipulates that the ordinary wage is the wage paid on designated paydays. Bonuses do not fall in this category, companies argue, as they are paid in bulk at certain times of the year.

Kim, who doubles as deputy prime minister for the economy, also said at the meeting that while Korea is on track to accomplish 3 percent growth, the quality of growth has yet to reach a satisfying level as it is still centered on just a few industries and economic conditions for the general public are still difficult. He also mentioned risk factors surrounding the fourth-largest economy in Asia such as the ongoing diplomatic row between China and Korea due to the deployment of a U.S. anti-missile shield and North Korea’s continuous threats.