Toshiba deal back on the table as Apple jumps in

Toshiba deal back on the table as Apple jumps in 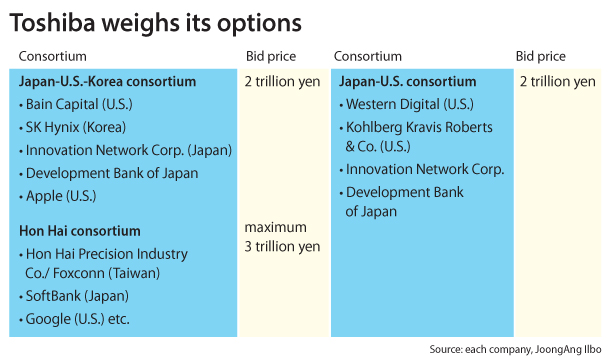 Toshiba is back to square one in choosing the preferred bidder for its flash memory unit, despite reports earlier this week that the embattled conglomerate was likely to pick a consortium led by U.S. hard drive maker Western Digital.

Disagreements over how much Western Digital would be involved in managing the chip unit in the future and the surprise addition of Apple to a consortium led by U.S. Bain Capital and Korean chipmaker SK Hynix led to the sudden backtrack, Japanese media outlet Nikkei reported Thursday.

It is the third time the negotiation table has been completely turned over.

Industry watchers had expected Toshiba to finalize the deal with a consortium involving Western Digital, the joint venture partner for its chip business, by Thursday when the Japanese company had scheduled a board meeting. As news spread that Western Digital CEO Steve Milligan visited Tokyo to meet with Toshiba President Satoshi Tsunakawa before the meeting, the deal seemed to be heading into its final stage.

However, instead of a final agreement, Toshiba reported it has “not made any decision to reduce the pool of candidate purchasers of Toshiba Memory,” in a statement Thursday.

Toshiba and Western Digital had reached an agreement on a bid price of roughly 2 trillion yen ($18.16 billion) and on plans to take Toshiba Memory public several years down the road. The two also agreed to give majority ownership to Innovation Network Corp. of Japan and the Development Bank of Japan.

However, the two reportedly failed to reach a consensus on the size of the stake that the U.S. firm would control. Nikkei reported that Western Digital wants to eventually raise its stake in the unit to roughly a third, but there have been disagreements regarding the timeline. As an antitrust screening issue is coupled with the shareholding structure, the two are having a difficult time finding a timeline suitable for them both.

Another major barrier for the Western Digital-led consortium is the reluctance of Toshiba employees to work for the U.S. company. The Asahi Shimbun reported Friday that many employees are against the sale largely due to the tactics the company used, such as seeking a court order to halt sales of Toshiba Memory to other purchasers.

Another game changer was the addition of Apple to the Japan-U.S.-Korea consortium that includes Bain Capital and SK Hynix. Apple, one of the largest buyers of NAND flash chips in the world, is reportedly throwing in 300 billion yen as part of the 2 trillion yen the consortium is offering Toshiba.

Apple’s entry is seen as a move to create balanced competition in the semiconductor market. With Toshiba and Western Digital combined, their memory unit would be close to catching up with market leader Samsung Electronics and would gain stronger negotiating powers over customers like Apple. The acquisition would also give Apple a stable supply chain to source the chips it needs.

“As the NAND flash memory market has been facing supply shortages, [joining the bid] could be a good strategy for Apple to secure a stable supply chain for chips,” said Lee Seung-woo, a research fellow from Eugene Investment & Securities. For SK Hynix, it could mean deeper ties with Apple and a chance to level the playing field with local rival Samsung Electronics, according to Lee.

A consortium led by Hon Hai seems to have less chance but it has made the biggest offer, 3 trillion yen. The major issue for the consortium is negative public sentiment on selling a technology-centered company to a Taiwanese firm with links to China.