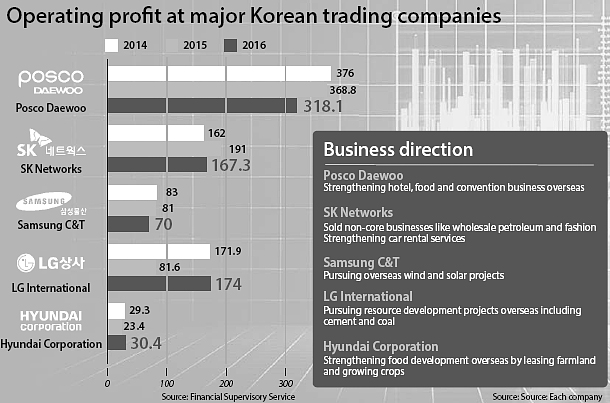 Korea’s trading companies are sometimes called “all-around” companies for the sheer number of businesses in which they engage, from steel and construction to movie distribution and book publishing, but these behemoth agents of industry are now looking to shed some weight in hopes of raising their profitability.

Last year, operating profit at the country’s top five trading companies was 759.8 billion won ($676.8 million), down from 822.2 billion won in 2014. So many of these companies are dropping unprofitable businesses while venturing into new promising areas overseas.

Posco Daewoo, the country’s largest trading company, currently engages in 68 different businesses, at least on paper. In February, it earned approval to work in steel frame construction and convention planning, and most recently, it took charge of finding a builder for a hotel in Yangon, Myanmar, that’s being managed by Hotel Lotte.

Posco Daewoo sees great opportunity in Myanmar, especially in real estate and resource exploration. It expects the country’s economy to grow at a fast rate for the foreseeable future. The trading company has already had success with an offshore gas field project in Myanmar that began in 2000. Another new area is food, which the company entered early this year.

Samsung C&T, the first trading company in Korea, is focusing on resource development and energy overseas. It is building solar and wind plants in Ontario, Canada, and expects the power plants to bring them stable profit for the next 20 years.

LG International has also initiated resource development and power plant projects in China, Oman and Indonesia. In Myanmar, it started building a cement factory three years ago that is due to begin commercial production within this year.

Hyundai Corporation is heading into the food business, leasing farmland and growing crops in Cambodia.

SK Networks has been shedding its non-core businesses, selling off its fashion business to Hyundai Department Store Group and liquid petroleum gas stations to SK Gas. Its wholesale petroleum and retail business, which used to account for a third its revenue, went to SK Energy.

In their stead, SK Networks has been ramping up its car rental business. For the last several years, its rental service has been showing steep growth and is close to becoming the second-largest player in the local car rental industry in terms of fleet size.

“The latest trend in trading companies is expanding overseas and narrowing down businesses,” a Samsung C&T spokesperson said.

Too big to grow

For the past two or three years, the top five trading companies in Japan - Mitsubishi, Mitsui, Itochu, Sumitomo and Marubeni - have been focusing on local businesses and reducing overseas resource development. They have invested in taking care of the whole supply chain for food products, from mass producing basic materials to retailing final goods. Creating their own value chain in retail is their solution against falling prices for raw materials like oil and coal, protectionist trade policies around the world and political disputes between countries.

Mitsubishi is farming tuna in Kushimoto, a coastal town in Wakayama Prefecture in western Japan, and then distributing the product wholesale to restaurants through its own supply chain. It even acquired a Norwegian state-owned salmon producer, Cermaq, in 2014.

Itochu acquired two businesses under American fruit producer Dole and is expanding into canned food manufacturing and convenience stores. Marubeni bought the agricultural side of the world’s third-largest grain seller, Nebraska-based Gavilon, and plans to expand its grain business.

“As raw material prices continue to fall, Japanese trading companies have set their sights on the food business as one with high potential,” Posco Research Institute said in a recent report. “As the food business has imbalance in supply and demand, firms have room to create additional value in the whole supply chain through logistics and trading.”

Korean trading companies have acknowledged the trend in Japan, but those in the industry say regulations are keeping companies away from engaging in local food and retail. Especially for tuna and used car sales, the business in Korea is more suited for small and midsize firms, not larger trading companies.

“If we jump into canned food or convenience stores like Japanese companies, the first response from the public will be criticism for excessive business expansion,” a source from a Korean trading company said on the condition of anonymity. “There are also a lot of regulatory barriers to overcome.”

The government has maintained it will limit conglomerates from expanding into new businesses. On Wednesday, it extended the expiration date for 47 industries in which small and medium-sized companies are granted favor. The designation was due to expire this year.

“If the government opens some businesses only to small and medium-sized companies, it will encourage them to stall growth and maintain their status as small and midsize as was the case with Naver,” said Oh Jung-geun, a professor of finance and information technology at Konkuk University in eastern Seoul. “Even now, about 30,000 small and midsize companies are sustaining business based on government funding, and that could hurt the economy’s growth.”