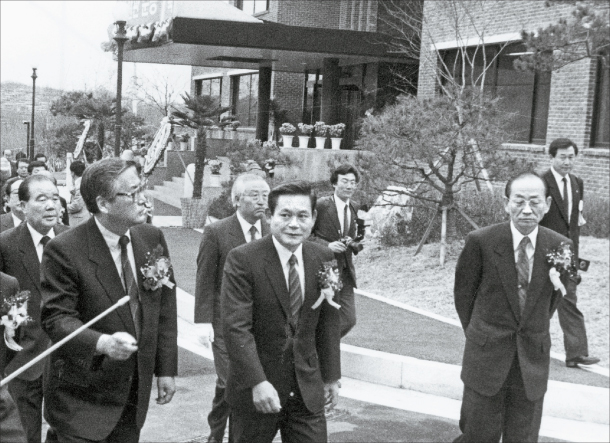 From right in the first row, Kang Jin-ku, the former chairman of Samsung Electronics, Lee Kun-hee, the chairman of Samsung, and Chung Won-shik, former Minister of Education, look around the campus of Seoul National University in March 1990. [JOONGANG PHOTO]

The father of Korea’s semiconductor industry, Kang Jin-ku, former chairman of Samsung Electronics and Samsung Electro-Mechanics, passed away on Aug. 19 at the age of 90 from a chronic ailment.

Kang became president of Samsung Semiconductor and Telecommunications in 1982 and introduced 64K DRAM in 1983. Samsung was the second company in the world to do so, even though Korea was far behind in related technology compared to its counterparts around the globe.

“When he moved [to Samsung Semiconductor and Telecommunications],” a relative of Kang recalled, “everyone thought he had been demoted, going from Samsung Electronics with 80 executives to Samsung Semiconductor and Telecommunications with just three. But Kang smiled and said he would work better since everyone’s responsibilities were clearly divided.”

The relative added, “Not only was he knowledgeable as an electronic engineer, his greatest strengths were his optimism and sincerity. He was full of passion to bring the country and the company to prosperity.”

“Chairman Kang would cheer up workers at the semiconductor plant in Giheung [Gyeonggi] back when the plant was little more than an open plain,” said Samsung Electronics in a statement released on Aug. 20. “He passed sleepless nights with researchers to lay the foundation for the memory chip and semiconductor business.”

Laying the groundwork for the company to eventually become the top chipmaker in the world, Kang became the chairman of Samsung Electronics in 1990. He held the post until his ailing health forced him to resign in December 2000.

Kang was born in Yeongju, North Gyeongsang, in 1927 and attended a prep school for teachers in Daegu before earning a degree in engineering at Seoul National University.

His career began as a technician at television stations, including Korea Broadcasting System and American Forces Korean Network. He joined Tongyang Broadcasting Company in 1963, before the station officially launched in 1964. Tongyang is the predecessor of JTBC. In his 1997 memoir, “A Career in Korea,” the publisher noted that Kang “led a team that made their own broadcasting equipment” and “was instrumental in the station starting its programming in December 1964.”

“He would buy parts from Cheonggyecheon [a market in central Seoul that used to be filled with shops] on his own and assemble them,” recollected a family member in a phone interview with JoongAng Ilbo.

“Chairman Kang’s talents first received recognition during his involvement in the opening of Korea’s first privately operated TV station, Tongyang Broadcasting Company, back in the 1960s - a time when even the concept of an ‘electronics industry’ was unfamiliar to most Koreans,” wrote Lee Kun-hee, the chairman of Samsung Electronics, in the foreword to Kang’s memoir. “He played a pioneering role in planting the roots for an electronics industry in Korea by insisting that all the television broadcasting equipment used in this venture be fabricated directly by Koreas.”

Lee added, “Even in international electronics circles, Chairman Kang has been widely acknowledged as a professional who speaks for the entire Korean electronics industry, further testimony to the scope of his accomplishments.”

Joining Samsung Electronics in 1973, Kang was promoted as the president of the company in just 9 months. He led the team to develop Korea’s first color television and microwave oven. Lee wrote that Kang turned the company’s first profit after assuming the chief executive position. “Determined to develop Samsung into a diverse and wide-ranging electronics maker,” Lee said, “Mr. Kang continued to expand operations, which ultimately resulted in the global corporation that is Samsung Electronics today.” Some say that he came to the rescue when the group was mulling over possibly closing down the company.

“I recall many stressful times since first joining Samsung in 1963, as we sought to overcome numerous difficulties and constantly dared to take on new challenges,” wrote Kang in the preface of his memoir. “Samsung Electronics has managed to turn crisis into opportunities, thanks to the challenging spirit and ceaseless efforts of employees and the solid strategic planning of management.”

He was the first person to be inducted into the hall of fame of Samsung, which the company opened to recognize the contribution of its employees.