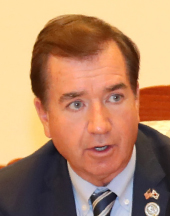 Washington prioritizes cutting cash flows to North Korea over any military strike, said Rep. Ed Royce, chairman of the U.S. House Committee on Foreign Affairs, in an interview in Seoul.

Rep. Royce, a Republican of California, sat for an interview with the Korea JoongAng Daily on Tuesday evening at the Grand Intercontinental Hotel in southern Seoul, on the sidelines of an event hosted by Korea International Trade Association (KITA). North Korea launched a ballistic missile over Japan earlier that morning.

“What it tells us is that the program is accelerating,” said Royce, recalling North Korea’s two nuclear tests last year and numerous missile launches. “They now have the capability of miniaturizing a nuclear weapon. There are some experts who say they now have the capacity, for example, to hit California.”

He pointed to the UN Security Council resolution passed last month and Washington’s own sanctions on the North, including the “Countering America’s Adversaries through Sanctions Act” against Russia, Iran and North Korea passed at the end of July.

“The intent of the sanctions is to cut off the hard currency because these weapons programs are enormously expensive,” said Royce. “It costs billions of dollars per year for a country whose entire economy is about $7 billion to run these nuclear weapons and ICBM programs. The strategy at this point is to curtail the hard currency they need to pay for this in order to shut down the program.

He also dismissed the possibility of military action against North Korea.

“You never take that off the table, but I don’t think anyone is seriously considering a military strike on North Korea,” said Royce.

“What is being deployed is a strategy of enforcement on the UN Security Council sanctions and our own domestic sanctions that would deprive North Korea of the means of funding its ICBM and nuclear weapons program.”

He said based on Washington’s sanctions on the Macau-based Banco Delta Asia for its role in laundering money for North Korea in 2005, “We know from defectors in the missile program that at that time they ran out of the money to run the program and had to shut it down. They also ran out of they money to pay the generals… This kind of strategy puts enormous pressure on North Korea.”

But Pyongyang’s return to the bargaining table “would require North Korea to stop its nuclear weapons tests, stop its missile launches, stop its rhetoric about destroying South Korea,” Royce continued. “This is the foundation of preparations for serious negotiations which would require inspections by the international community.”

He added that such movement has not been seen on the part of North Korea, adding Pyongyang “repeatedly has cheated while in the process of negotiations in the past.”

Royce recalled his conversations with President Moon Jae-in in June during the Korean leader’s visit to Washington and further conversations on Monday, and said they are in agreement on policy toward the North.

“His view is that we need to deploy these sanctions in order to deter North Korea from moving forward with its nuclear weapons capability, and I think we’re in concurrence on that,” said Royce.

He said curtailing the ability of North Korea to use slave labor, closing international ports and putting sanctions on any financial institution that is transacting business on behalf of North Korea “goes to the heart of the system which does not have domestic currency of any value but has to obtain through these methodologies the hard currency for… those million dollars plus cost of the nuclear and ICBM programs.”

He said he recently spoke with Thae Yong-ho, the former North Korean deputy ambassador in London who defected to Seoul, who said that the North Korean regime is “putting all of the cash into the military and the nuclear weapons program,” leaving its people “on their own.”

He also visited a comfort women memorial in Namsan Park to pay respect to the hundreds of thousands of women who were forced into sexual slavery by the Imperial Japanese Army during World War II. Royce said the memorial “serves as a symbol of peace and humanity across the world, as well as a reminder of the atrocities that occurred.”

Royce has been a longtime supporter of the plight of the comfort women victims and coauthored the landmark House Resolution 121, which called on the Japanese government to apologize and accept responsibility for the coercion of young women into wartime sexual slavery in 2007. He also has protested the Japanese government’s efforts to remove a so-called comfort women monument in Glendale, California.

He praised the Korea-U.S. free trade agreement and pointed to the “tremendous amount of economic growth.” He added out that CJ Foods has expanded its plant in Fullerton, California from 70 employees to over 270, and plans to expand further, adding, “It’s become a regional hub for manufacturing.”

On revisions to the Korea-U.S. FTA, Royce said, “I think the existing framework should be the foundation, and if there are specific instances on the U.S. side or Korean side where there is a lack of enforcement or some issue that needs be addressed, that issue should be worked out between the U.S. and Korea.

“It is working to benefit American workers and businesses in exporting into markets here, and it’s also beneficial to South Korea. It’s a win-win.”