‘Suburbicon’ is a dark reflection on American life

‘Suburbicon’ is a dark reflection on American life 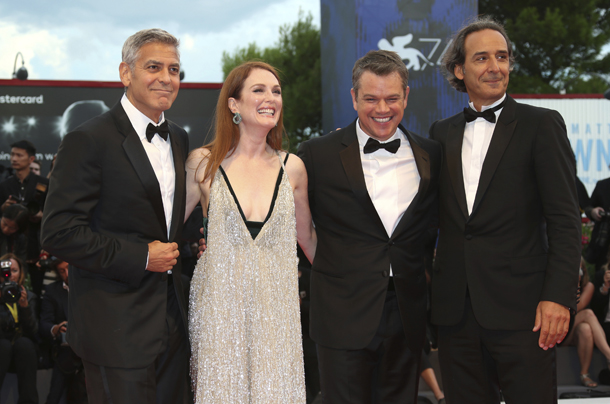 From left, actors George Clooney, Julianne Moore and Matt Damon with French composer Alexandre Desplat, right, upon arrival at the premiere of the film “Suburbicon” on Saturday during the 74th edition of the Venice Film Festival in Venice, Italy. [AP/YONHAP]

VENICE, Italy - Affable, handsome George Clooney was all charm at the Venice Film Festival on Saturday, but don’t be fooled.

The actor says his latest directorial effort, “Suburbicon,” is an angry movie for an angry country - his own. It’s a twisted tale of darkness at the heart of the American dream.

Clooney was joined by his wife, human rights lawyer Amal Clooney, on the Venice red carpet Saturday. The couple are parents of twins, born in June, and have an Italian home nearby on Lake Como.

At a news conference earlier in the day, Clooney said the United States now is “probably the angriest I have ever seen the country, and I lived through the Watergate period of time.”

“There is a dark cloud hanging over our country right now,” he said.

America’s divisions give an unnerving timeliness to “Suburbicon.” The satirical film noir stars Matt Damon and Julianne Moore as residents of a seemingly idyllic, and all-white, 1950s suburban community that erupts in anger when a black family moves in. It fuses a script by the Coen brothers with a narrative about racial divisions inspired - in a negative way - by Donald Trump’s presidential campaign.

“I was watching a lot of speeches on the campaign trail about building fences and scapegoating minorities,” Clooney said.

That set Clooney and writing-producing partner Grant Heslov to thinking about other points in United States history when forces of division were in the ascendant. They remembered 1957 events in Levittown, Pennsylvania, a model suburban community where white residents rioted at the arrival of a black family.

They fused that idea to an unproduced script by Joel and Ethan Coen about a similar white-picket-fence community where a crime goes horribly wrong in farcically bloody ways. The images of white rage in the movie feel unnervingly contemporary, recalling last month’s rallies in Charlottesville, Virginia.

“Unfortunately, these are issues that are never out of vogue in our country,” Clooney said ahead of the film’s red carpet premiere. “We are still trying to exorcise these problems. We’ve still got a lot of work to do from our original sin of slavery and racism.”

On one level, “Suburbicon” is a comedy, in which the best-laid plans of Damon’s scheming corporate executive go bloodily astray. Damon and Moore practically explode with suburban repression, and there’s a delicious turn by Oscar Isaac as a prying insurance investigator.

Saturday was Damon’s second time on the Venice red carpet this week. He also stars in Alexander Payne’s “Downsizing,” in which - as so often - he portrays a likable everyman. But Damon also can play the psychopath, as he demonstrated memorably in “The Talented Mr. Ripley.” In “Suburbicon,” he’s a bland suburbanite who becomes a monster.

“I don’t really get to play the bad guy a lot, but I do get a nice range of roles,” Damon said.

“And I know exactly what he meant,” Damon said. “I look kind of like an average American person, so I think directors get to have fun playing with different variations of what that might mean.”

For all the bloody fun in “Suburbicon,” the social concerns Clooney displayed in previous films he directed, including “Good Night, and Good Luck” and “The Ides of March,” are never far from the surface.

The Clooney Foundation he and wife run gave $1 million in the wake of Charlottesville to the Southern Poverty Law Center to combat hate groups.

Clooney said he was anxious that “Suburbicon” not be a polemic or “a civics lesson.”