Commerce, markets, a thriving economy - they’re not words one would associate with North Korea, but business is booming in Pyongyang, the capital, despite some of the toughest sanctions being imposed on the world’s most reclusive country. A market economy bearing resemblance to 1990s China is emerging there, with small and independent businesses flourishing.

Jin Jingyi, a professor at Peking University, frequently visits North Korea and has seen its economy grow with each visit. Since the first sanctions imposed after nuclear tests in 2006, there have been questions about whether the embargoes have been effective in stopping the regime’s ambitions. Firsthand experience is hard to come by, considering the secretive nature of the government and heavy travel restrictions.

The JoongAng Sunday, an affiliate of the Korea JoongAng Daily, spoke with Professor Jin about his experience in the hermit kingdom and his insights on the burst of economic activity that has happened there despite international sanctions. Jin sees a North Korea that has become confident in itself and a regime that believes it has found a stable inner structure.

“Now, North Koreans specifically aim to develop nuclear capabilities over the edge of American tolerance,” he said, “and it is imperative that we view the current North Korea from a different perspective.”

Here are edited excerpts from the interview.

Left: Prof. Jin Jingyi of Peking University has visited North Korea more than 20 times in the past three decades. Above left: Taxis queue outside the offices of the Rodong Sinmun, the official newspaper of North Korea’s Workers’ Party in Pyongyang. Above right: Children watch television in a kindergarten attached to a farmers’ co-op outside Pyongyang. [JIN JINGYI]

Q. How has Pyongyang changed from the past?

A. I have visited Pyongyang over 20 times since the 1980s, but this last trip in May brought to light the most tangible changes. Honestly, I was shocked. Above all else, commerce is flourishing. Just three years ago, the only places I could visit for a meal were near the Koryo Hotel.

Now, there are restaurants all throughout downtown with clean interiors, better food and pleasant service. Everyone, not just foreigners but residents of Pyongyang, is freely dining, and the menus have a large variety of selections. A sushi place opened by Kenji Fujimoto, the personal chef of Kim Jong-il, is doing well, and kiosks set up here and there are selling drinks and snacks.

Another sign of change is the popularization of taxis. When I visited Pyongyang, there were lines of taxis waiting for customers not just in front of hotels, but also outside important buildings where there might be visitors. There were, reportedly, solicitations for long-distance travelers outside Pyongyang Station. The paper money I received from the cab driver as change was completely frayed at the edges, which suggests money is flowing well in the economic system.

Is it true that their economy is doing well despite sanctions?

What was even more surprising was my visit to shopping centers at Kwangbok Street. The variety of goods available was comparable to Chinese department stores. Three years ago, most of the products were from China. Now, there are also domestically-made goods, so much so that I saw no Chinese imports despite the fact that their business was a joint venture with Chinese capital.

A source in the industry told me this change came about not because of the expulsion of Chinese merchandise, but because of the natural localization of light industry. The packaging and design were noticeably different. Apart from the logos, the soy bean and pepper paste in red rectangular boxes resembled their South Korean counterparts.

Why are these changes taking place?

The first reason is that the market economy has taken hold of North Korea since Kim Jong-un’s rule began. Greater autonomy at government departments, administrative agencies and corporations is another significant factor. The increase in restaurants was due to each government department being able to operate independently. The health ministry, for instance, owned restaurants, one of which I visited, spread across Pyongyang.

Evidently, the localization of products has naturally followed because there are over 80 different brands of soju in North Korean shops. A farmers’ co-op I visited in the outskirts of Pyongyang had a contract system where farmers could freely do what they wished with surpluses of produce. The system has been applied to farms everywhere in North Korea, and productivity has improved, resembling many of the starting steps of Deng Xiaoping’s reforms in China. 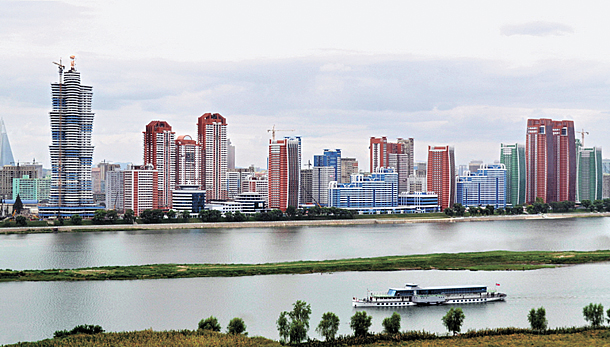 I think North Korea’s reforms have already started, just with differences in terminology. North Korean scholars I met have used the word “innovation.” There are even journals published by Kim Il Sung University that argue there should be more autonomy and authority, if the government wanted to give them to each department in the first place. On average, the North Korean economy is at the stage of China’s in the early 1990s. But China back then forbade real estate transactions, and in North Korea, people can buy and sell apartments.

Isn’t the rest of the country still impoverished?

The countryside is going through hardship, but this change happening in Pyongyang could possibly spread to rural areas. I assume the deciding factor will be development of the market economy. Seeing as how new exclusive districts are being implemented under Kim Jong-un’s rule, these might become the centers of reform that hasten such events.

Does that mean Kim Jong-un’s policy of “parallel nuclear and economic development” is working?

No, because there are signs that North Korea’s economic growth will see its limits soon. There is no chance of exponential growth in the country. To further develop, capital investment must follow, and to do that, opening up to the outside world is crucial. Even if the North Korean government willed it, how can there be any investment made with present international sanctions?

Then will it be impossible for North Korea to continue without giving up its nuclear capabilities?

From what I gather based on articles from North Korea, the government is showing no indication of halting nuclear tests. Under Kim Jung-il, there was some room for compromise, but that’s not possible in the current state. Their determination to make the United States acknowledge their nuclear armaments has considerably strengthened from the past, and this misconception arises from North Korea overestimating its own abilities. It believes it can go all out to make the United States submit.

North Korea is hostile even toward China, which would have been unthinkable under the rule of Kim Jong-un’s father. The Korea Central News Agency has made obvious denouncements of the Chinese government, and any mention of China has been erased from television and media. The international community must recognize that Kim Jong-un’s regime is a completely different one from that of the past and renew their approach toward it. The country’s newfound confidence in its stable economy has given them an unyielding attitude to external pressure.

To me, that seems unlikely. North Korea has numerous means to withstand external pressure for the long haul. Even when it becomes intolerable, North Korea will not give up its nuclear capabilities. That would mean that Kim Jong-un’s regime has collapsed.

When push comes to shove, no one knows what type of decision North Korea will make. The only people who suffer from sanctions are ordinary citizens. When that suffering becomes extreme, it may explode into indescribable disaster. That is the worst-case scenario, which is why we cannot rely on sanctions alone. As I witnessed this time as well, I doubt the embargoes are working as intended.

Then what is the solution?

The only way left is to change North Korea with the expansion of the market economy. A paradigm shift, wherein money can be used for survival, is already occurring. If the North Korean people are assured of their livelihood, there will be no reason to maintain nuclear armaments. International society needs to not only pressure North Korea, but also propose a possible vision for them. For that, I believe talks are in order.