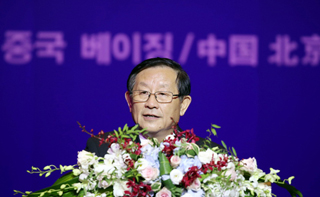 Thank you for attending the celebration for the 25th anniversary of Korea-China ties, hosted at the Korean Embassy, as the main guest on Aug. 24. Thanks to your presence, we could avoid having no main guest as it had been for the Gaecheonjeol reception last year. After the event, I looked up your interview from 10 years ago. You had volunteered to go to the small town of Donggou in Yanbian Korean Autonomous Prefecture during the Cultural Revolution in the 1960s. The locals, mostly ethnic Koreans, chose you as the leader of the production division for your diligence. Local party executives said the people had keen eyes, and you recalled that the good-hearted local elders in Donggou taught you how to could change the hearts of the people with sincerity.

Then you received a Ph.D. in mechanical engineering at Clausthal University of Technology in Germany and worked for Audi Corporation for more than 10 years. Upon returning to China, you presented the 2020 Chinese Science and Technology Development Strategy to key leaders in Zhongnanhai, Beijing. The Organization Department in charge of staffing worked with the United Front Work Department and appointed you as the minister of science and technology, chairman of the China Zhi Gong Party representing overseas Chinese and students and vice chairman of the Chinese People’s Political Consultative Conference. Your career and life impressed me deeply.

On Aug. 24, the ceremony was also held in Seoul, and the speaker of the National Assembly was in attendance. The heads of the two countries exchanged celebratory messages. However, the People’s Daily did not publish the news. Since the fourth nuclear test early last year, North Korea’s provocations ruined Korea-China ties. It is frustrating how a radar that Korea had installed to defend its territory left people in the two countries torn.

You learned how to win hears with sincerity in Donggou. When anti-Korean, anti-Chinese sentiments spread in the two countries in 2008, Korea promoted a movement to approach China with humble and warm hearts. China also responded and we shared the experience of changing hearts with hearts.

With a big political event slated for October, the shadow of Sino-centrism is returning. This is the outdated mindset of “China not allowing challenges and embracing absolute superiority over other countries and justifying domination,” from “Sino-centrism and Nationalism” by Lee Sung-gyu.” Chinese President Xi Jinping pledged that China’s plan is to build a community among Asian nations and realize a win-win. Confucius said, “Now my way is to hear their words, and look at their conduct.” Hopefully, China’s dream is not a new Sino-centrism but a new China. We wish you the best.