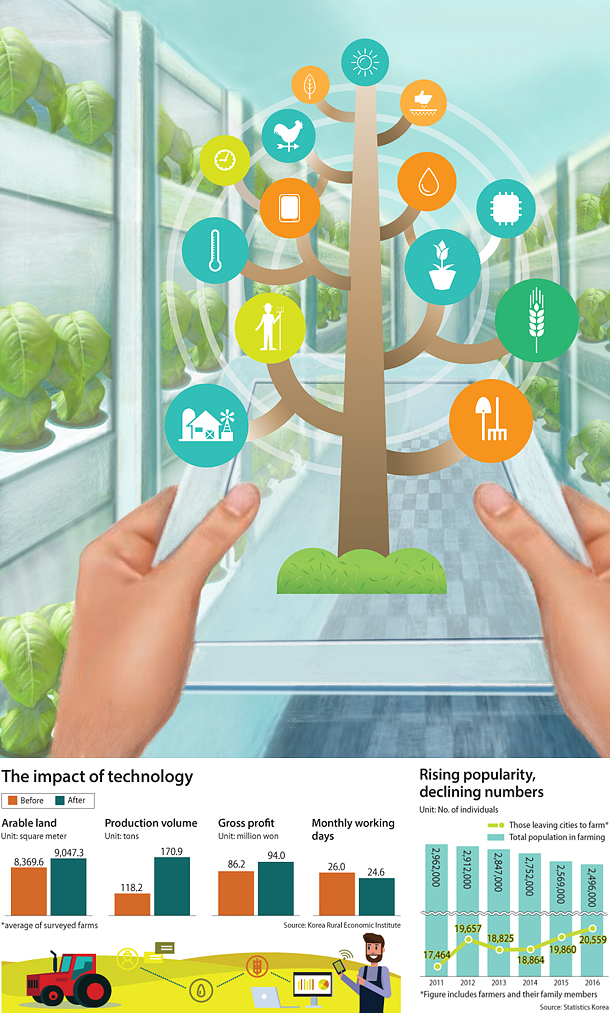 After Mr. Choe quit his high-paying corporate job early last year, he and his wife decided to move to Yeongju, North Gyeongsang, to start a farm.

Choe, a 58-year-old former quality control manager who’s done his share of physically demanding work at a number of major Korean shipbuilders, thought farming wouldn’t be much of a challenge. It took him less than a month to realize he was wrong. Growing zucchinis and trying to make a living out of it took more of a physical toll than he had anticipated. Choe and his wife have not given up on farming just yet, but a year down the line they are still looking for ways to make the work less demanding.

This is where the convergence of farming and technology may come to the rescue, ultimately enabling people like Choe to take advantage of what’s known as “smart farming.”

In a report, the Korea Rural Economic Institute (KREI), a think tank dedicated to research in agricultural development and related policy, described smart farms as “a farm that can remotely and automatically maintain and manage the growing environment of crops and livestock by utilizing ICT [information and communication technology] in [greenhouses], stables, orchards and so on.”

A farmer that adopts these smart farming techniques uses sensors to monitor the conditions in the area where plants are grown, including temperature and humidity as well as the levels of CO2 and oxygen. Data analysis is also a crucial element in smart farming, as the control unit needs to have a reference point to understand and interpret the information collected by the sensors. For instance, if past data indicates that strawberries are the sweetest when they are grown in an environment with a temperature between 20 and 26 degrees Celsius (68 to 79 degrees Fahrenheit), the system will automatically keep the temperature within that range based on the information recorded by the sensors.

The concept of smart farming is still considered relatively new in Korea, where the majority of farmers come from an older generation that are generally less willing to adopt a completely new approach to growing and maintaining crops.

But more people like Choe are giving up their jobs in the city and turning to farming.

According to data from Statistics Korea, the number of people leaving the city to take up farming has jumped from 17,464 in 2011 to 20,559 last year.

Still, the growing interest in farming hasn’t been able to stop the steady decline in the number of farmers. According to the statistics agency, there were 2.96 million farmers in 2011. This number plummeted to 2.5 million by 2016.

“The farming population in Korea continues to fall and age,” said the KREI report. “Farming methods that rely on human labor are reaching their limit, not to mention the shrinking investment in the agricultural sector.”

Even so, Koreans are reluctant to change their farming techniques.

“Most farmers don’t know what to do with the technology even if it’s installed on their farms,” said the report. “This is because, despite advantages such as an increase in productivity and reduction of labor costs, there are no previous models that farmers can follow, or they lack confidence in the effectiveness of smart farming.”

While smart farming is yet to find a home at most farms in Korea, it has already been put into practice in other parts of the world.

Even back in the early 2000’s, major farms in the United States began to use automated trackers and machinery to more effectively prepare their fields with less manpower. More recently, the level of automation has increased, as has the precision of the equipment.

John Deere, the leading agricultural equipment maker in the United States, has included GPS in its tractors and machines for roughly a decade already. The system tracks the movement of the tractors, most of which are automated, and makes sure they don’t cover the same ground twice, increasing the efficiency of the automated system.

Monsanto, an American multinational agricultural and biotechnology company, is another leader in the industry that’s trying to bring new technology into agriculture in the United States.

One of the new areas that the company has dived into is the field of data science.

Yong Gao, the director of corporate engagement Asia and Africa for Monsanto and president of Monsanto China, told the Korea JoongAng Daily during an interview in Seoul on Aug. 17 that data science can be used in farming to optimize the size of the yield.

“If we can get all the factors [that maximize production] and optimize the function of crop yield [which combines factors such as the genes of plants, environment and farming practices with other variables], then we can maximize the yield,” Gao explained. Data science enables the analysis of these factors.

Gao provided analysis of historical weather data as an example, explaining that accumulated data on weather during the farming season can help farmers predict weather patterns that might affect their crops in the future.

Nearly 200 million acres of farms in the United States have adopted Monsanto’s climate field-view platforms, according to company data.

Investors don’t shy away from putting their money on smart farming start-ups in the U.S. either.

In May this year, a U.S. agriculture group AeroFarms raised more than $34 million from investors around the world. The company runs indoor farms which are stacked vertically to maximize space. They grow produce such as lettuce using aeroponics, which is the process of growing crops in a misty environment without using soil.

There are, however, home-grown start-ups that are trying to spread smart farming in Korea.

Farmpath, an agriculture tech company based in Daejeon, offers the most common smart farming solution to Korean farmers.

One of its services, titled FarmNavi, collects, analyzes and controls the setting of greenhouses via hardware such as sensors. The monitoring is done through a farmer’s smart device or a kiosk that’s installed near the greenhouse. The system uploads the data into a cloud system provided by the company and the accumulated data is analyzed and compared to the information gathered from other users in order to optimize growth and maximize yield.

Jang Yoo-seop, a computer-programmer-turned entrepreneur, started the company in 2011 after realizing that there was a dearth in new technology in the agricultural industry.

“I was asked to create a software program that can manage a farming cooperative with some 60 farmers,” explained Jang. “But there was no request for software updates from the cooperative, which made me realize that the industry is essentially in a rut when it comes to technology.”

Jang’s parents, who had worked hard to raise livestock for nearly four decades, were heavily in debt. This led him to realize that farmers need to adopt new technology so that their labor is not wasted.

Jang also realized over the years that even with an improved yield, farmers are not compensated properly because of the way agricultural products are commonly sold in Korea. Normally, a farmer sells crops by box to a middle man. The middle man puts them up for auction at markets around Korea, which means the price that they pay the farmers can fluctuate greatly depending on demand, which also varies by region.

For this reason, Jang decided to help farmers keep track of their produce.

Agrisys was developed for this purpose. The system gathers all the data relating to a farmers produce, including where the crops were produced and how much they were ultimately sold for. Over the years, the system can even estimate the going rate of products and recommend where crops are likely to fetch the highest price at certain times of year. 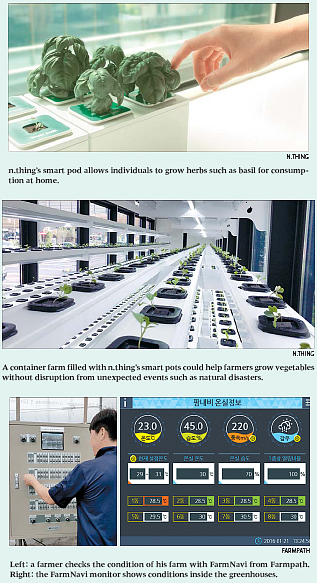 Agriculture in the city

His business model begins with a simple and small pot, where herbs such as basil are grown. While the pots look small, they are topped with various sensors that monitor the condition of the plants inside.

“We call it the smart pot, equipped with sensors that can track the moisture in the soil and the temperature, as well as other factors crucial to the growth of the plants,” Kim explained.

Kim’s company started in January 2014 with the seed money his team earned by winning an award at a start-up competition sponsored by Google. He was given an opportunity to pitch his company in London. Five minutes into his pitch, he had already received an offer from a British company to invest $150,000.

He took these pots to the next level and created a complete farming ecosystem in a shipping container. This container, which provides farmable space equivalent to 1,322 square meters, is equipped with not only sensors but also LED lights and temperature controllers. n.thing sold the container farm to a company in Denmark in August.

“There are needs overseas for this type of farm because it allows people to grow vegetables even in the middle of a city,” said Kim. Demand for his container farms comes from countries such as the Middle East and Singapore as well. Ultimately, Kim envisions anyone living in a city will be able to grow their own vegetables using these plants.

Manna CEA, a startup based in Jincheon, North Chungcheong, has been developing a farming ecosystem that defies climate change.

The company adopted an aquaponics system for its farms, which relies on fresh water fish to produce bacteria that plants can feed on.

The system, according to the company, uses 90 percent less water than traditional farming systems while nearly doubling the yield. It is also pesticide free, which has became a major issue among Korean consumers after the recent contaminated egg scandal.

Manna CEA has raised over $13 million in venture capital, according to company data.

There are, however, hurdles to jump over for tech companies hoping to operate in the local agriculture sector.

One of the important tasks is to raise awareness among farmers that they need to change their methods in order to increase productivity, even against unfavorable conditions such as natural disasters.

Since a number of free trade agreements were signed with countries such as Chile and the United States in recent years, the quantity of imported agricultural products has nearly doubled. The total in 2004 stood at about $14.5 billion. The figure catapulted to about $30.5 billion by 2015.

Local farmers are unable to cope with natural disasters and other unfavorable conditions, leading to a fall in production. As a result, the production of locally grown products dropped over the years, causing imports to increase. For instance, the market share of homegrown carrots has fallen below 50 percent with the fall of production in Korea. “The production of carrots plummeted due to [unfavorable weather conditions such as] the heavy rainfall in September, 2004 and typhoons in 2007 and 2012,” said Ji Sung-tae, a senior researcher at KREI. “This led imported carrots to take the bigger share of the pie in the domestic market.”

“The dynamics of farming are changing rapidly,” said Kim of n.thing. “For instance, most strawberry farms in Indonesia had to close down because they could no longer grow strawberries because of climate change. Modern farming must be able to cope with such changes.”

There is also a lack of technological understanding among senior officials.

“A lot of information technology companies put their foot into the industry but end up leaving because of a lack of government support, which tends to lean more toward spending money for hardware,” explained Jang of FarmPath. “But software to control the hardware is equally - if not more - important because software programs allow this equipment to react properly to farming conditions that can often change.”