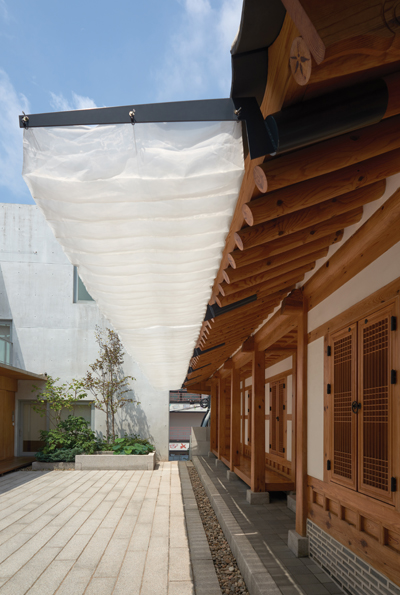 Architecture firm stpmj’s “Chail Renaissance” is a reinterpretation of chail, an awning that was devised to block the sun in traditional Korean architecture. [LEE JONG-KEUN]

At the height of summer when the sun is shining its brightest, many people unconsciously shade their eyes by placing their hand on their forehead to block out the sun. As much as people love the sunshine, many seek refuge from it by setting up parasols at the beach and closing the curtains at home.

But how did Koreans in the royal court of the Joseon Dynasty (1392-1910), with its many outdoor ceremonies and rituals to perform, secure shade from the sun?

According to records, only the royal families and high ranking officials were entitled to shade from the sun.

On Saturday, Arumjigi Culture Keepers Foundation, a nonprofit organization founded to protect and preserve traditional Korean culture, kicked off an exhibition at its unique three-story center that’s a combination of hanok (a traditional Korean house) and contemporary-style architecture. Located next to Gyeongbok Palace in central Seoul, the center allows visitors to witness how Koreans traditionally set up tents and canopies to avoid the sun and the rain.

Working with local architects and the Korean traditional culture research institute Onjium, Arumjigi is displaying various traditional methods of creating shade that have been given modern touches, as well as new designs of sun shades that were inspired by traditional methods at an exhibition titled “Shade from the Sun.” The exhibit runs until Nov. 10.

On the first floor, a traditional royal tent called a makcha has been reproduced. In the Joseon Dynasty, a temporary tent was set up for the king, the crown prince or high ranking officials to stay during ceremonies or while traveling.

“Since there is no surviving documentation on royal tents, Onjium referred to several paintings and pictorial reports that illustrate the use of makcha,” said Shin Hye-sun, senior PR manager at the foundation. When researching the details, Shin says the group tried to stay true to the “Painting of Feast at Bongsudang” (1795) that is currently in the collection of the Dongguk University Museum. The painting shows that the royal tent has a vaulted roof, pillars without walls and a flat floor. The drapes on all four sides can be raised by supports. The painting also reveals that there’s a folding screen installed inside the tent. 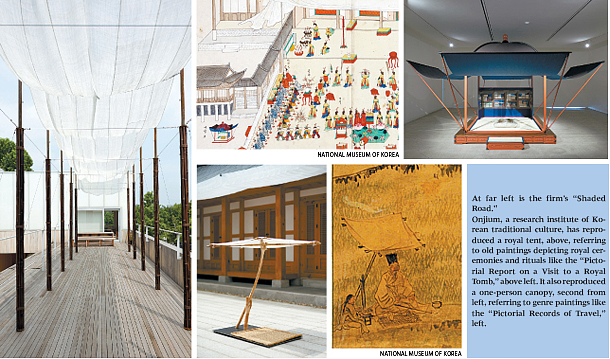 Next to the reproduced makcha, there’s a tent that has been designed by Onjium in collaboration with Dongah Aluminum Corporation. Unlike the other tents with low ceilings, this new design, which uses innovative technology, was inspired by the royal tent.

The second floor, which houses an open-air courtyard and a hanok, also displays a portable shade canopy for one person created by Onjium. In an 18th-century genre painting titled “Pictorial Records of Travel,” which is part of the collection of the National Museum of Korea, there’s an illustration of a scholar sitting down underneath a similar canopy made from wood and fabric. Onjium says it tried to revive the original look, making it very easy to assemble and disassemble.

After being inspired by pictorial records like the “View of the Gyeonggi Provincial Office” of the 19th Century, which is in the collection of Leeum, Samsung Museum of Art, stpmj created their own interpretation of chail, a kind of awning which was devised as a means of blocking the sun in traditional Korean architecture.

The group also created the “Shaded Road,” which is installed on the wooden deck walkway of the third floor. Visitors can take a seat on beanbags under the shade.

Kim Bong-ryol, an architect and the president of the Korea National University of Arts, says raising artificial roofs for people is part of the “essence of architecture,” which makes this an attractive topic for architects.

“The works on exhibit are not collections from already produced works,” said Shin, “but works that have been visualized from workshops that we’ve held after coming up with a theme. It was an inspiring experience for both us and the architects to think about how our ancestors put roof over their heads and how it affects us today.”