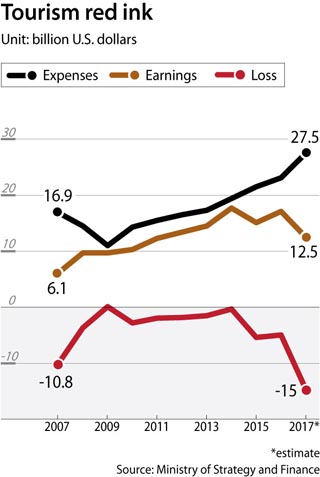 Six months after China stopped group tours to Korea, some 90 percent of companies catering to Chinese tourists have closed down, according to a tourism association.

“Among the inbound tour agencies focusing on the Chinese tourists, only around 10 are open right now,” said Kim Jong-taek, secretary-general of the Asia Inbound Tourism Association.

There are around 160 companies catering exclusively to Chinese tourists, according to the Ministry of Culture, Sports and Tourism.

“Those open today are not dealing with group tours but packages for individual travelers from China who come here to buy goods to resell back home,” Kim said.

In March, the Chinese government banned travel agencies from organizing group tours to Korea in the wake of a geopolitical dispute with Seoul over a U.S. missile defense system deployed to Korea.

Since then, New Huacheng International Tourism, the largest inbound tourism agency catering Chinese tourists in Korea, sent more than half of its employees to Japan and countries in Southeast Asia, to cater to Chinese tourists traveling there.

“We have some 120 employees stationed abroad,” said Woo Sung-deok, head of the company. “It was the only way to keep the company afloat.”

The company brought in some 1.1 million tourists from China last year. That number dropped to around 100,000 as of August of this year.

Around 10 Korean tour companies have relocated to Southeast Asia.

Employees of the companies that closed were left to fend for themselves.

“We closed down after March, and some of my employees got together and opened a lamb skewer restaurant,” said a CEO of one tourism company that catered to Chinese tourists. “I felt bad and pitched in a little bit to help them set it up.”

“I wish I could reopen the company to help out the laid-off employees, but the market is showing no signs of getting better,” said another CEO of a shut tour company.

Some inbound tour companies have turned to the market in Southeast Asia but they don’t spend as much as Chinese.

“At this rate, we don’t know when the slump will end,” said a spokesman of Lotte Duty Free. “It will probably be difficult to restart Chinese group tours for the rest of this year.”