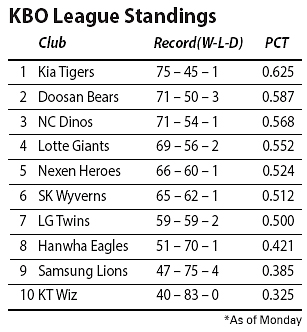 While the Doosan Bears and the Lotte Giants stole headlines in the Korean Baseball Organization over the weekend - for both good and bad reasons - the NC Dinos are silently maintaining their spot in third place with two shutout wins against the LG Twins over the weekend at Masan Baseball Stadium.

The weekend sweep against the Twins, the seventh ranked team, has allowed the Dinos to edge closer to the Bears, who fell into a four game losing streak last week. The Bears had a surprise loss against the Samsung Lions on Saturday, but managed to turn things around for a 7-1 victory at Jamsil Baseball Stadium on Sunday.

Though the Bears got as close as 1.5 games behind the Kia Tigers, their disappointing performance last week has pushed the top spot further out of their reach.

The Bears also topped one million fans visiting the stadium for the ninth consecutive season.

On the other hand, the Giants are sitting comfortable with a postseason spot for the first time in five years. On Sunday, the Giants defeated the Hanwha Eagles 7-2 at Sajik Baseball Stadium in Busan.

While the Giants were losing 2-1, Choi Jun-seok had a two-run hit to bring back the lead. With that, the Giants are now in a five game winning streak, having won every game since they lost to the Bears on Aug. 30.

The Giants are now only two games behind the Dinos, and have successfully maintained their 3.5 game lead against the Nexen Heroes.

On Sunday, the Heroes had an impressive comeback at the top of the ninth against the Tigers at Gocheok Sky dome.

Despite being 7-1 down as they entered the bottom of the ninth, the Heroes managed to pull it back and went on to win 8-7.

In Suwon, the SK Wyverns and the KT Wiz won a game each, with the Wyverns winning 15-7 on Saturday and the Wiz victorious on Sunday 13-5. 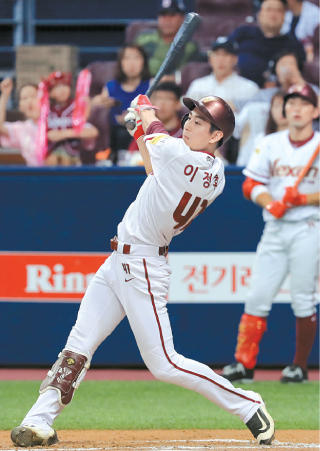 Lee Jung-hoo of the Nexen Heroes is about to re-write KBO history.

In the Gocheok Sky Dome in western Seoul, during the Heroes’ game against the Kia Tigers on Sunday, Lee had one hit and was given a walk to help the Heroes win 8-7, ending the Tigers’ five game winning streak. Starting from the first, Lee had his 157th hit of the season against Hector Noesi.

Though he was at a disadvantage with two strikes and one ball, Lee managed to hit off Noesi’s fastball at a speed of 148 kilometers (92 miles) per hour.

Lee, who was already famous before the start of the season as the son of Lee Jong-beom, is guaranteed the rookie of the year award. Lee has been consistent throughout the season, having played all 127 games this season with a 0.327 batting average and 157 hits. Aside from the month of June, Lee managed to maintain a batting average above 0.300.

Lee finds it difficult physically to play in all the games as the Heroes’ center fielder, but he continues to challenge himself and is overcoming the difficulties. Lee’s father was an outstanding rookie, with 133 hits in his first season in the KBO, but Lee has well exceeded his father’s record and is ready to set a higher standard for KBO rookies.