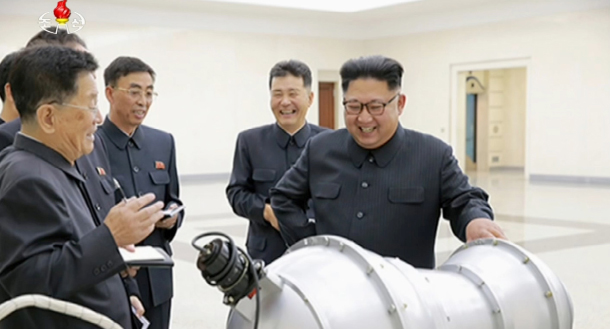 North Korean leader Kim Jong-un smiles Sunday while inspecting an alleged hydrogen bomb that can be loaded onto ICBMs. [YONHAP]

North Korea is believed to have scores of 10- to 20-kiloton nuclear bombs. Their destructiveness is as powerful as tactical nuclear weapons designed for use in battles. If the bombs are carried on the mid-range Hwasong-12 missile that travelled 2,700 kilometers (1,678 miles) over Japan last week or the intercontinental Hwasong-12 missile that puts the U.S. mainland in range, the weapons become strategic.

The hydrogen bomb the North tested on Sunday is claimed to have a destructive yield of 50- to 200-kilotons. Since a strategic bomb starts with a nuclear payload of 100 kilotons, North Korea now has a tactical and strategic nuclear arsenal. Pyongyang can now challenge Washington and Beijing on equal footing as strategic nuclear weapons states.

Its rapid mastery of lethal nuclear technology has confounded the United States, China and Japan. The situation places South Korea in immediate mortal danger. With no independent deterrence capacity, South Korea is totally at the mercy of a nuclear-ready, unruly neighbor. No matter how much the United States assures South Korea of the safety of its nuclear umbrella, interception can hardly be counted on as American strategic assets are thousands of miles away. Pyongyang could capitalize on Seoul’s Achilles’ heel to gain the upper hand in the inter-Korean relationship.

North Korean leader Kim Jong-un has ordered his army to go past Seoul and occupy the southern region and instructed his strategic forces to test rockets toward the Pacific to ready their strategic capabilities. The strategic forces are to divert U.S. attention and resources through nuclear and missile tests, which would allow his conventional troops to target Seoul and completely destabilize the South by effectively blocking U.S. reinforcements from approaching South Korea. Kim has much bolder and dynamic ambition with nuclear weapons than his father, who used nuclear weapons development as a bargaining chip for economic aid or insurance of regime security.

As nuclear arms are the ultimate and absolute weapon, nuclear is the only deterrence against nuclear. So far, we had no doubts about the protection of the U.S. nuclear umbrella. But we now have to question whether the United States would come to the rescue when its own people and territory are under threat by North Korean missiles with powerful hydrogen bombs.

U.S. President Donald Trump, with his businessman’s ways, is even out to kill the symbolic bilateral free trade agreement with South Korea. We can no longer rely on our longstanding alliance with the United States. Calls to develop our own nuclear arms will gain ground in South Korea. If Washington doesn’t allow Seoul to go nuclear, it should at least lend us tactical nuclear weapons to counter the real nuclear threat from North Korea.

It was right for South Korean defense minister Song Young-moo to float the idea of bringing U.S. tactical nuclear weapons back to the South when he met with U.S. Defense Secretary James Mattis and National Security Adviser H.R. McMaster in Washington last week. He indirectly raised the issue by saying conservative opposition parties and the media in South Korea were demanding the redeployment of the tactical weapons for more deterrence against the North Korean nuclear threat. The rhetoric underscored the state of urgency and insecurity of South Koreans in a timely way.

President Moon Jae-in and his government have been idealistic in their views of the North Korean nuclear crisis, hoping to arrange dialogue between Pyongyang and Washington for a peace deal. But we must look straight to the reality. North Korea won’t likely surrender its hard-earned status of a strategic nuclear weapons state even if it strikes a peace deal with the United States. With nuclear arms, it no longer needs a security guarantee from the United States to defend its regime.

North Korea will most likely make the most of its newfound power to humiliate Seoul on the international stage, exploit our economic assets, and demoralize us socially and culturally. The gloating look on Kim’s face seems to show he is already imagining South Korea at his feet. We cannot let ourselves fall hostage to an impoverished dictatorship.