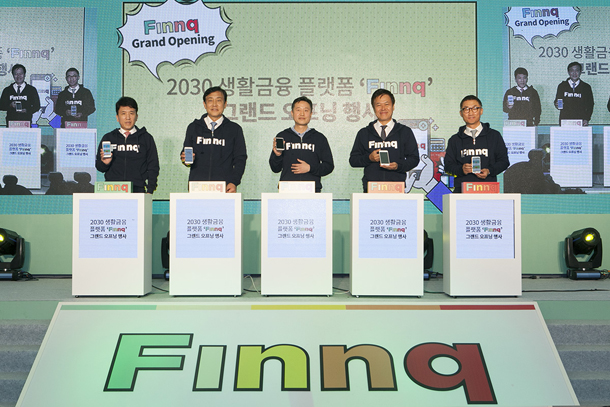 The company was founded in October last year by the mobile carrier and the bank, owning 49 percent and 51 percent stake respectively, to effectively respond to rapid digitization in the financial sector and the emergence of internet-only banks like Kakao Bank.

Finnq does not offer its own financial programs or banking services, as it is not an internet bank. However, it coaches youngsters in their 20s and 30s to build up a healthy asset management habit by aggregating date based on the financial activity of the app’s users.

“Bank of Korea data says each young person holds over 20 million won [$17,700] in debt,” said Park Jung-ho, CEO of SK Telecom, during the launch event held at KEB Hana’s Myeongdong branch in central Seoul, emphasizing the development of financial technology, or fintech, should move in a direction that helps consumers to manage their finances in a “healthier” manner rather than merely making the transaction process convenient and fast.

“Finnq will enable young people to self-diagnose their spending habits and expand healthy savings based on the top-notch technologies of the era including [AI] and big data,” said Ham Young-joo, president of KEB Hana Bank.

The most notable feature of Finnq is the AI financial management assistant named Fingo.

Fingo, built based on SK Telecom’s Nugu AI engine, is a chatbot that offers users the financial information they need. If you ask “How much did I spend on food this month?” the chatbot will automatically give you an answer along with graphics of how much you spend at restaurants.

Based on analysis of consumers’ financial situation and spending habits, the AI also recommends financial programs from diverse financial institutions such as banks and financial start-ups, though talks with institutions other than KEB Hana are still in progress, Finnq CEO Min Ung-jun said.

While chatting based on voice-recognition is not enabled yet, the service is due soon, Min added.

The chatbot works based on information offered through two other Finnq services, called “See Me” and “Fit Me.”

See Me provides a dashboard showing users’ earnings and spending patterns. If users agree to open up their account information for analysis, not only KEB Hana but information from all other banks can be collected into one single app to enhance visibility of overall cash flow from users’ pockets.

Fit Me is a tool to help young people save money.

Users can set up a rule in the app that adds a specific savings amount to regular purchases. For example, a user can tell the app to save 10 percent whever they buy a coffee - if the user spends 3,000 won on a coffee an addition 300 won will be saved, so the user’s accont will be charged 3,300 won.

When asked whether there are any plans to one day turn Finnq into an internet-only bank, Min said they haven’t yet thought that far ahead.