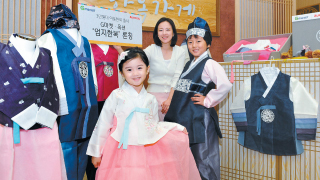 eBay Korea, which operates Gmarket and Auction, launched its own hanbok brand Umji Hanbok in collaboration with a local hanbok maker on Monday. [EBAY KOREA]

eBay Korea, the biggest domestic e-commerce company in terms of transactions, launched Umji Hanbok, its own hanbok label, on Monday, hoping to capitalize on the rising demand for traditional Korean clothing.

Although Umji Hanbok is working in collaboration with a local hanbok maker, it is registered as an independent brand under eBay Korea and will be exclusively retailed through Gmarket and Auction, the Korean arms of the global e-commerce giant.

The brand offers hanbok for children aged between two and eight. It currently sells 12 designs for boys and nine for girls. The entire lineup is available for 39,000 won ($34.44) a piece, cheaper than the industry average.

“eBay Korea decided to make its own hanbok brand as demand for hanbok on online platforms continued to rise,” said a spokesman at the company. “The latest collaboration will enable cheaper hanbok at uncompromised quality,” the spokesman added.

The company said all Umji Hanbok products are made using silk and received Korea Certification from the Korea Apparel Testing & Research Institute.

Launching a private brand or striking a partnership with manufacturers to co-develop certain products has become a trend among e-commerce operators in Korea, in an attempt to grasp more revenue in a cutthroat competitive industry.

“Co-developed products at e-commerce platforms have largely centered on food or household products until now, but Umji Hanbok indicates that the realm has expanded to fashion segments as well,” Baik Min-seok, director of the integrated sales team at eBay Korea said.