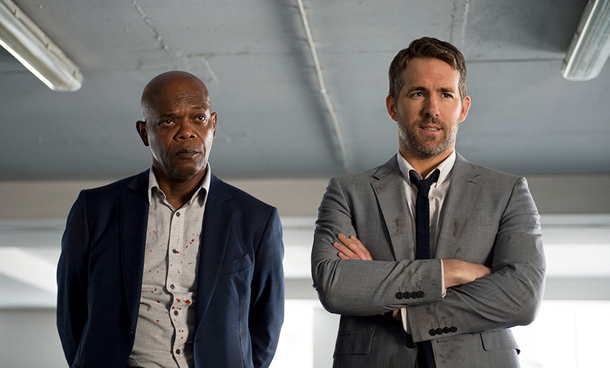 “The Hitman’s Bodyguard” was the winner of both Korean and North American box offices over the weekend.

The action comedy, starring Ryan Reynolds and Samuel L. Jackson, pushed down local movies “A Taxi Driver,” “Midnight Runners” and “V.I.P.” and beat down high-budget science fiction fantasy “Valerian and the City of a Thousand Planets” to top Korea’s box office from Friday to Sunday.

“The Hitman’s Bodyguard,” revolving around an elite bodyguard getting an incarcerated contract killer as a client, sold 556,000 tickets over the three days at 482 screens, adding to a total of 777,000 admissions since it hit theaters on Wednesday.

Despite not-so-favorable reviews, the movie managed to top North America’s box office for three weekends straight, which is due to no new wide releases. With no new wide releases, Hollywood basically took the Labor Day weekend off and put an end to what’s expected to be the lowest-earning summer movie going season since 2006 - the last time the industry saw a sub-$4 billion summer.

Things weren’t as apocalyptic as analysts suggested going into the weekend, which had the potential to be the worst since 1992, but that’s hardly cause for celebration. While official numbers for the four-day weekend won’t be available until Tuesday, studio estimates and projections expect that in total this Labor Day weekend will be the lowest earning since 1998.

“There’s no sugarcoating the fact that this was a very slow labor day weekend,” said Paul Dergarabedian, the senior media analyst for comScore. “This was a fitting end to a rough summer.”

Some did make it out to the multiplexes over the holiday weekend, though. According to studio estimates on Sunday, action flick “The Hitman’s Bodyguard” topped the charts for a third weekend with $10.3 million, having earned a total of $54.9 million from North American theaters.

In the Korean box office, “Midnight Runners,” starring Kang Ha-neul and Park Seo-jun, climbed up a spot to second with 286,000 tickets sold in its fourth weekend while period epic “A Taxi Driver” dropped two spots to fourth, selling 238,000 admissions. Each sold 5.38 million and 11.9 million tickets in total since the release.

At close in third was “Valerian.” Coming from “The Fifth Element” (1997) French director Luc Besson, the film was not able to make a breakthrough in Korea’s box office, something that it also failed to do in North America upon its debut in July. It sold 250,000 tickets in its debut weekend in Korea. Inspired by the classic French comic series “Valerian and Laureline,” the movie is set in the 28th century, and follows the lives of the happy-go-lucky Major Valerian (Dane Dehaan) and his fellow agent Sergeant Laureline (Cara Delevigne).

In North America, the horror spinoff “Annabelle: Creation,” from Warner Bros., came in at second, adding added $7.3 million, bumping its domestic total to $89 million. The Weinstein Company took spots three and four, with the crime drama “Wind River” in third with $5.9 million, and the animated family film “Leap!” in fourth with $4.9 million.

Steven Soderbergh’s “Logan Lucky” rounded out the top five with $4.4 million. Audiences did have a few unconventional options to choose from this weekend, including a 40th anniversary re-release of Steven Spielberg’s sci-fi classic “Close Encounters of the Third Kind” and an IMAX-only run of the pilot episode of Marvel’s “Inhumans.” Neither made a significant splash, though.

“Close Encounters of the Third Kind” earned $1.8 million from 901 locations, while “Inhumans” took in $1.5 million from 393 North American IMAX screens ahead of its Sept. 29 premiere.

Still, Dergarbedian notes that both smartly took advantage of a quiet weekend and added money to the bottom line.

And as Hollywood looks to forget the dismal summer of 2017, which will likely cap out with just over $3.8 billion, there is a bright spot on the horizon in the form of a red balloon and a homicidal clown as “It” prepares to break records when it hits theaters next weekend.