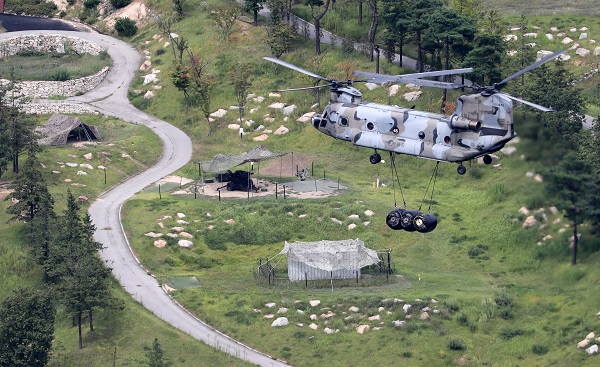 The Ministry of Environment on Monday cleared the way for the U.S. military to complete the deployment of an advanced antimissile system in the southern village of Seongju, North Gyeongsang, announcing that a study found no safety problems.

High Altitude Area Defense (Thaad) system. That conclusion will speed up plans to place four additional launchers at the site, where other key components were already deployed in May. A typical Thaad battery is composed of six launchers and an X-band radar system.

The Environment Ministry said it conducted a survey last week with the state-run Korea Environment Institute. Electromagnetic wave emissions, noise, dust and other potential dangers to animals and plants were examined.

Stressing that the conclusion was based on a summary study, the Environment Ministry requested the Defense Ministry to continue measuring and monitoring electromagnetic wave emissions on a regular basis in the future and announce the results publicly. People living around the area should be invited when surveys take place, it said.

Construction work will soon start to complete the site preparation and prepare for the deployment of additional launchers. The Defense Ministry will finalize the plan with U.S. Forces Korea.

The Defense Ministry said Monday it will deploy the four launchers at the earliest date possible in order to counter North Korea’s nuclear and missile threats. It still stressed that the deployment is temporary until a full-scale environmental survey is conducted.

“As the government already announced, we will allow the U.S. military to complete the construction work to operate the system for the time being,” the ministry said. “The government will conduct a larger-scale environmental impact study in the future for the entire site to secure democratic and procedural legitimacy and transparency. Based on the outcome, a final decision will be made on the deployment.”

Shortly after he took office, President Moon Jae-in halted the Thaad deployment, agreed to between Seoul and Washington during the presidency of his predecessor. At the time, he ordered environmental surveys to back the legitimacy of the process.