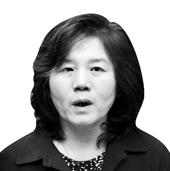 North Korea told the United States through an unofficial dialogue channel last May that it would halt all nuclear and missile testing if Washington ditches its anti-North Korea policy and sanctions, as well as signs a bilateral peace treaty that would replace the armistice and formally end the Korean War, a senior South Korean government official said Monday.

The source, who exclusively spoke to the JoongAng Ilbo, said North Korea’s offer was relayed by Choe Son-hui, director general of North American affairs at North Korea’s Foreign Ministry, in Oslo, Norway, where a delegation from her country met with former American officials in the so-called Track 1.5, or semi-governmental, semi-private discussions.

It was the first time in the Donald Trump administration that such talks were held, which are usually participated in by active government officials from North Korea and retired officials from the United States.

A full list of the delegations were not officially revealed, but the local source said representatives from Washington included Thomas Pickering, former U.S. ambassador to the United Nations, Robert Einhorn, former special advisor for nonproliferation and arms control at the State Department, and other think tank experts.

Throughout the talks, the North Korean delegation did not shy away from calling their country a “proud nuclear state,” calling it an “objective fact,” regardless of what other nations said, according to the South Korean source.

“In the past,” said another local government official, “North Korea used to ask for economic support or official dialogue in exchange for absolute denuclearization or a freeze in its nuclear and missile development programs. With their weapons program reaching new heights, they seem to have upgraded their negotiation tactics to offering a halt of any testing.”

That offer goes against Washington’s core North Korea policy, which is based on completely denuclearizing the Korean Peninsula. The United States has made it clear it would resume dialogue with Pyongyang if it refrains from further nuclear and missile testing, and has used sanctions to try to push the country into relenting.