Seoul being marginalized by U.S.

Seoul being marginalized by U.S. 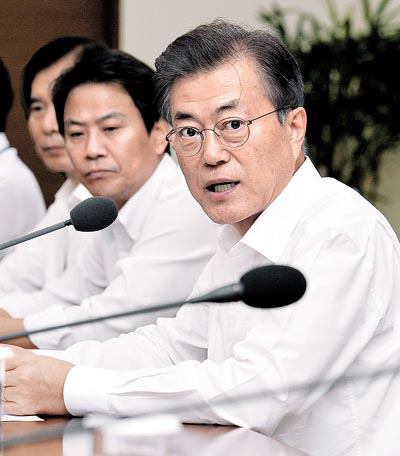 President Moon Jae-in presides over a meeting with senior presidential secretaries in the Blue House on Monday. [YONHAP]

The Moon Jae-in administration is being marginalized in its trilateral alliance with Washington and Tokyo as Pyongyang ratchets up its nuclear brinkmanship.

North Korea jolted the world Sunday by carrying out its sixth and most powerful nuclear test. After it claimed to have detonated a hydrogen bomb that can be loaded onto an intercontinental ballistic missile, South Korea, the United States and Japan, as well as the North’s chief ally China, strongly condemned the provocation.

As of 8 p.m. on Monday, President Moon and U.S. President Donald Trump had yet to talk, although Trump did discuss the nuclear test with Japanese Prime Minister Shinzo Abe.

“We are currently coordinating the schedule,” a spokesman for Seoul’s presidential official said Monday afternoon, hinting that the Moon and Trump may talk late Monday. “Remember that the last call took place at 10 a.m. in Washington time and 11 p.m. in Seoul time.”

Moon and Trump had their last call at 11 p.m. on Friday, after the North fired an intermediate-range ballistic missile over Japan on Tuesday.

While Seoul struggled to set up a call with the White House, Tokyo had much better luck. Trump and Abe spoke on the phone call 11 p.m. Tokyo time Sunday, hours after the nuclear test. According to the Japanese government, they talked for about 10 minutes and agreed to put unprecedented pressure on North Korea.

It was Abe and Trump’s second phone call Sunday. They talked earlier in the morning before reports of the nuclear test.

Following their second call Sunday, Deputy Chief Cabinet Secretary Yasutoshi Nishimura briefed reporters shortly after midnight. “The two leaders reaffirmed that Japan and the United States will stay 100 percent together,” Nishimura said. “The two leaders also shared the perception that the roles of China and Russia are important and they also reaffirmed the position that Japan and the United States will closely cooperate in dealing with the situation including the UN measures.”

A Japanese reporter, then, asked why South Korea was left out, pointing out that Trump and Abe stressed in the past the importance of trilateral cooperation among the South, Japan and the United States. “It was because this phone call was too short,” said Nishimura.

This was not the first time a Moon-Trump phone call was delayed after provocation by Pyongyang. Immediately after the North fired the intermediate-range ballistic missile over Japan on Tuesday, Trump and Abe had a phone call, but it took three days for Moon to talk to Trump.

When the North fired an intercontinental ballistic missile on July 28, Trump and Abe spoke on July 31. Moon, however, only talked to Trump 10 days after the test. The Blue House blamed Moon’s summer vacation for the delay.

When concerns have been expressed about the delay in communications between Moon and Trump, the Blue House said there was no need for the two presidents to talk urgently because cooperation between Seoul and Washington is extremely close.

Discord between Seoul and Washington on how to deal with Pyongyang is starting to show. Trump slapped down the Moon government with a tweet on Sunday.

“South Korea is finding, as I have told them, that their talk of appeasement with North Korea will not work, they only understand one thing!” he wrote.

The Blue House issued a statement Sunday rebutting that tweet and defending Moon’s policy of wanting to negotiate with Pyongyang. “We have experienced the tragedy of fratricidal war. We cannot repeat it again on this land. We will seek denuclearization of the Korean Peninsula through peaceful means with our allies,” it said.

“Trump’s tweet was quickly reported [to the Blue House],” a presidential official said Sunday. “So we had a discussion and decided to issue the statement.”

The Blue House also said Monday that the National Security Council of the White House confirmed that Seoul and Washington have no differences over policies toward the North.

The Blue House said it asked the White House through a diplomatic channel about Trump’s tweet.

“We got the reply last night,” said a presidential official. “It said there was no disagreement between the South and the United States.”

According to the Joint Chiefs of Staff, the Army’s ground-to-ground ballistic missile and the Air Force’s air-to-ground missile accurately hit a target set up in open waters east of the peninsula.

The Blue House also issued a press release on Monday to dismiss concerns that the Moon administration was being neglected.

Chung Eui-yong, the head of the Blue House’s National Security Office, talked to his U.S. counterpart, H.R. McMaster, for 30 minutes from 10:15 a.m. on Monday to discuss the two countries’ coordinated countermeasures, presidential spokesman Park Soo-hyun said. “It was their third phone call since the North’s sixth nuclear test,” he added.