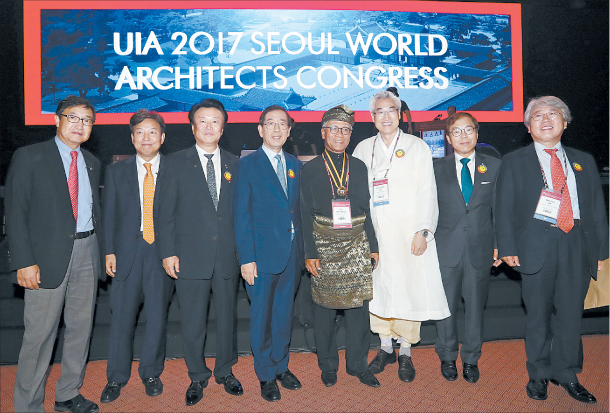 Seoul Mayor Park Won-soon, fifth from right, with dignitaries at the kick-off ceremony of the Seoul World Architects Congress at COEX in southern Seoul on Monday. [YONHAP]

The International Union of Architects (UIA), the nongovernmental organization that represents nearly 1.3 million architects worldwide, kicked off its four-day conference, the Seoul World Architects Congress, at COEX in southern Seoul on Monday.

“Architecture is culture. And what better place can there be than the beautiful city of Seoul to hold a very important world congress of architects? A city that is well known for its culture, heritage and design,” said Esa Mohamed, president of UIA, in his opening remarks. “With the theme ‘Soul of the City,’ Seoul will mark the history of UIA as a turning point in architecture that is more responsible and responsive to the community’s needs and the environment.”

He added, “Seoul is living up to its reputation as the World Design Capital by extending beyond its physical aspects and embracing the realms of the soul, emotion and culture.”

The International Council of Societies of Industrial Design named Seoul the World Design Capital of 2010.

“Seoul is currently undergoing a period of reflection and transition,” said Seoul Mayor Park Won-soon in his keynote address. “The past industrialization period was all about demolition and reconstruction and redevelopment. Nowadays, however, the focus has shifted to history and culture and nature and, most importantly, people. Seoul is striving to become a more people-oriented city.”

He said, “Some 45 percent of residential structures in Korea are apartments and we cannot let this go on. The city will focus on developing and preserving various types of residential spaces, to allow residents more options to choose from.”

Open until Thursday, the world congress will be joined by architects worldwide, including Dominique Perrault, who designed the ECC building and walkway on the Ewha Womans University campus, and Winy Maas, the designer of Seoullo.

Other sessions held through Thursday will include applying virtual reality in architecture, smart cities, kinetic surface design, the past, present and future of Seoul’s residential design, different house styles in Southeast Asia and water-sensitive urban design.