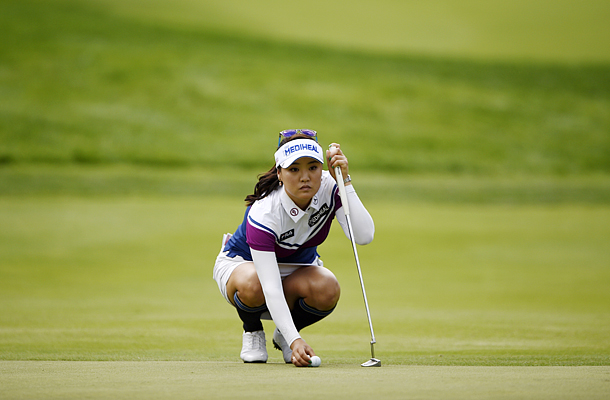 Ryu So-yeon, the No. 1 ranked female golfer, lines up her putt during the Canadian Pacific Women’s Open in Ottawa. [AP/YONHAP]

Though Korean female golfers have ended their historic winning streak, they made history again at the Rolex World Ranking on Tuesday. 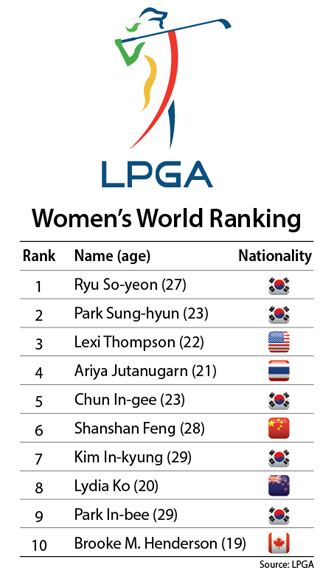 While Ryu So-yeon maintains the top spot for the 11th consecutive week, Park Sung-hyun and Chun In-gee each moved up a spot. And while Park decided to take a break in preparation for the LPGPA Tour’s last major tournament, the Evian Championship, her ranking still went up a spot, as Lexi Thompson of the United States finished tied for 21st at the recent Cambia Portland Classic presented by JTBC.

Park, ranked first worldwide, is now also ranked first for the LPGA Tour’s scoring average this season with 69.00, and for the first time in her career, her ranking points exceed 8.00.

Players get ranking points based on at least 35 tournaments from tours in the United States, Europe, Korea, Japan, Australia and England over the past two years. They get more points for playing well in major tournaments, or against high-ranked competitors or in events within the last 13 weeks.

But Park wasn’t the only one who benefitted from Thompson’s poor performance in Portland. While Park took a break, Ryu competed, missed a cut for the first time since her LPGA Tour debut in 2012, but still maintained her ranking with 8.87 points.

From left, Park Sung-hyun watches her shot during the final round of the Canadian Pacific Women’s Open. Chun In-gee watches her shot at Cambia Portland Classic Presented by JTBC. [AP/YONHAP]

In addition to her LPGA Tour success, Ryu was nominated one of ten candidates for Sportswoman of the Year by the Women’s Sports Foundation on Aug. 18.

So far, a total of eight countries have produced top golfers, but with Ryu’s success, Korea became the country to have produced the most, followed by the United States with Christie Kerr and Stacy Lewis.

Having already won 13 tournaments this season, Korea golfers are only three victories from setting a new record for the most number of wins.

While Lydia Ko of New Zealand and Ariya Jutanugarn of Thailand dominated the LPGA Tour last season, Korean golfers slowly made their way up this season. Looking at the World Ranking, a total of 40 Koreans are inside the top 100. And starting from the U.S. Women’s Open, they’ve managed to win five consecutive tournaments.

If Chun defends her title at the Evian Championship starting on Sept. 14, then for the first time in Korean golf history, the women’s Rolex World ranking will have its top three spots filled by Koreans.