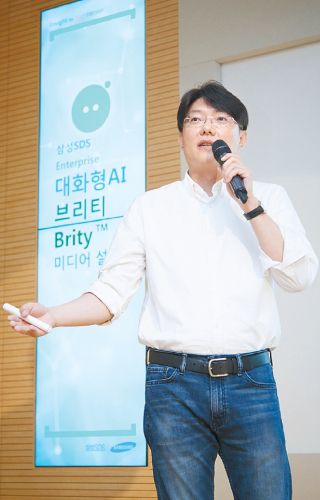 Samsung SDS, a provider of IT services, unveiled an artificial intelligence platform on Tuesday catered to its corporate customers.

On the enterprise end, the platform, called Brity, can answer questions from employees, either through text or voice command, about their companies’ guidelines, facilities and business performance. On the consumer end, the platform can field phone calls and complaints as if the customer were talking to a human representative.

The platform can work on various devices including corded telephones, computers and mobile devices, Samsung SDS said, and deliver answers based on data accumulated on companies’ internal servers.

According to Samsung SDS, the core strength of their new AI lies in its ability to understand the underlying context in customers’ requests. For example, if a customer asks, “I ordered a refrigerator yesterday. When will it arrive?,” the AI is capable of understanding that the second sentence is the query and the first sentence provides the context, and can offer the most suitable answer in response. The company said existing chatbots without the ability to understand context will only answer back, “I will help you with ordering the refrigerator,” catching only the action verb “order.”

Samsung SDS said it had been developing the technology for machines to process natural human language since 2014. Before its market launch on Tuesday, the company tested Brity on 400,000 employees at Samsung affiliates, where it was able to answer questions like “What was our business division’s performance last month?” Samsung SDS believes the speed at which Brity can cull through data for answers will help companies streamline their work.

Lee Chi-hoon, vice president of AI research team at Samsung SDS, assured that the service also had top-notch security and the ability to limit access to certain information based on employee rank.

The similarity of Brity’s name to the AI platform run by Samsung Electronics, Bixby, raised questions about whether they would be in competition with each other, but Kim Jong-pil, vice president of development at Samsung SDS, said their business target of enterprise customers was different from Bixby’s more general audience.

Both systems currently use a different technology for voice recognition, and the two companies are not considering options to link the two platforms. Still, Kim said linking the two platforms wouldn’t be difficult technically speaking and raised the possibility of partnership in the future as Samsung hopes to create a larger ecosystem based on artificial intelligence, including possible implementation in smart homes.