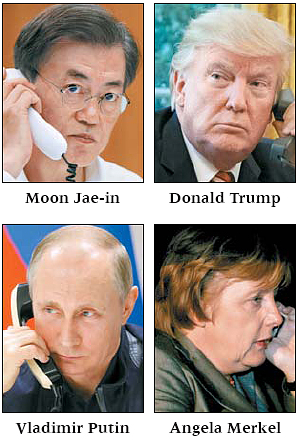 President Moon Jae-in is turning to tougher military and economic actions to pressure Pyongyang to end its nuclear brinkmanship.

During his talks with world leaders, Moon stressed that the time has come for the international community to impose sanctions that are more than just a slap on the wrist. He urged the leaders to devise unprecedentedly strong sanctions to make the North actually feel the pressure.

In his phone call with Trump, Moon proposed lifting limits on payloads allowed on South Korean missiles and Trump agreed. “As an effective countermeasure, the two leaders agreed to lift the cap on the missile payloads imposed under the Korea-U.S. missile guidelines,” Presidential Spokesman Park Soo-hyun said Monday night, after Moon and Trump concluded their 40-minute phone conversation, which lasted from 10:45 p.m. until 11:25 p.m. on Monday.

A bilateral agreement signed in 1979 and revised in 2012 prohibits Seoul from developing ballistic missiles with ranges over 800 kilometers (497 miles) and payloads exceeding 500 kilograms (0.5 metric tons). While the two countries have revised the agreement to allow the South to develop missiles with longer ranges from the initial 180-kilometer range, the payload restrictions had remained unchanged. Seoul wanted to revise it to produce more powerful missiles and Washington finally gave a green light on Monday.

“Taking into account relations with other neighbors such as China and Japan, we did not propose longer ranges,” a senior Blue House official said.

South Korea’s missiles are capable of reaching all parts of North Korean territory with their 800-kilometer range. “The intention in increasing the payloads is to destroy underground bunkers that will be used as shelters for the North Korean leadership including Kim Jong-un in times of emergency,” said a military official.

The military imported Taurus missiles and bunker buster bombs to target the North’s underground facilities. Because they are fired from fighter jets, which can be deterred by the North’s air defense system, the military wanted to develop more powerful ballistic missiles for faster and more effective attacks. Military sources said payloads heavier than 1 ton are particularly effective in destroying underground targets.

Moon also told Trump that his government will provide full support to complete the U.S. military’s deployment of the Terminal High Altitude Area Defense (Thaad) antimissile system in the South. On Monday, the Moon government cleared the way for the U.S. military to complete the deployment in the southern village of Seongju, North Gyeongsang, by announcing that an environmental impact study found no safety problems.

The White House said Trump told Moon that Washington was willing to approve arms sales to bolster its defense capabilities. Trump “provided his conceptual approval for the purchase of many billions of dollars’ worth of military weapons and equipment from the United States by South Korea,” said the White House, without providing details of any specific new contracts.

Conspicuously missing in the Blue House briefing on Moon’s remarks during his conversation with Trump was his policy to use inter-Korean dialogue to resolve the current crisis. Although Moon has long stressed that pressure is intended to force the North to join some kind of negotiations, he did not reiterate that stance on Monday to Trump.

Trump recently slammed Moon’s approach. “South Korea is finding, as I have told them, that their talk of appeasement with North Korea will not work, they only understand one thing!’’ Trump said on Twitter on Sunday in response to the North’s nuclear test.

In his talk with Putin, Moon asked Moscow to impose stronger economic sanctions on the North. “It is time for the United Nations Security Council to seriously consider an oil embargo and a plan to fundamentally cut Pyongyang’s source of foreign currency such as a ban on the import of North Korean laborers,” Moon told Putin.

In July, China and Russia protested an oil embargo when the United Nations discussed a new resolution. Putin, however, avoided agreeing with Moon. He only said the nuclear crisis should be resolved through diplomacy. Putin told Moon they would discuss the issue further at their summit in Vladivostok this week.

While Moon managed to talk to the leaders of major countries, he has not talked to Chinese President Xi Jinping. China’s agreement is critical for an oil embargo, as it is the North’s biggest supplier of fuel. “We have delivered our wish to Beijing to arrange Moon’s phone call with Xi, and we are waiting for their reply,” a senior Blue House official said Tuesday.

It remains to be seen how China will act this time. During a 2003 nuclear crisis, China cut oil supplies to the North for three days and the North returned to the six-party denuclearization talks.

China is in a sensitive position as the Chinese Communist Party will hold a congress on Oct. 18. The event is seen as an important test of Xi’s power, as his second five-year term will be confirmed and new officials under him will be appointed. According to observers, he may also try to lay the groundwork for extending his tenure beyond two terms by delaying the designation of a successor.

“Because of the domestic political situation, Xi cannot make a drastic shift in his position toward the North,” a Blue House official said. “But we can expect some changes regarding the latest nuclear test.”

China also broke its silence over the nuclear test, carried out just hours before Xi delivered an opening speech at an international summit.

Chinese Foreign Ministry Spokesperson Geng Shuang said Monday that stern complaints were lodged with the North Korean Embassy in China. He, however, refused to say what China’s position is on an oil embargo. “As to how the UN Security Council will respond and what action it may take, this depends on what comes out of the discussion by its members,” he said.

“We strongly deplore the nuclear test conducted by the DPRK,” leaders of the five-nation Brics group said Monday. The Brics group is made up of Brazil, Russia, India, South Africa and summit host China.

Moon’s promise to Trump to deploy the Thaad battery quickly could also be an obstacle to China’s support to pressure the North. China, along with Russia, has argued that the antimissile system’s powerful radar is a threat to its national security.