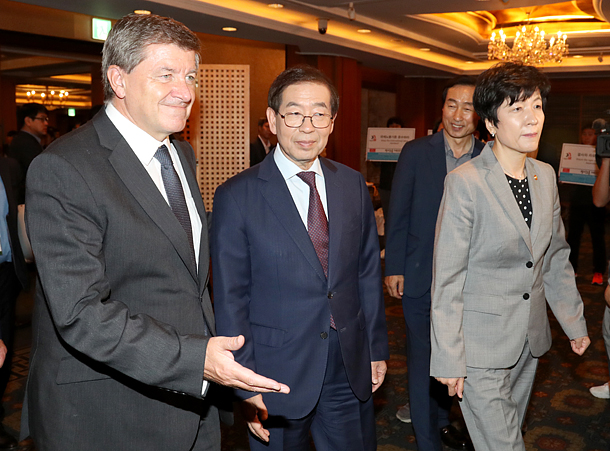 International Labor Organization (ILO) Director General Guy Ryder told reporters upon his visit to Seoul on Tuesday that ratifying two conventions of the organization will help solve the ongoing battle by teacher and civil servant labor unions for legal registration.

“For many years the ILO has been commenting upon some of the problems in respect to trade union rights in Korea,” Ryder told reporters in a joint press conference with Seoul Mayor Park Won-soon at the Seoul City Hall.

He added, “Korea entered the ILO in 1991 and these questions have been under examination in ILO since 1995. So it’s a long story and we’ve seen some progress and some problems.”

Korean Teachers and Education Workers Union (KTU) have been in a legal battle with the government since 2013, when the government stripped the KTU of its legal status after the union refused to comply with a government demand that it expel members who had been dismissed from their schools.

The Korean Government Employees’ Union was established in 2009, but the central government barred it from legal registration because it accepted as members former civil servants who were dismissed from the government.

“Let me say that ILO has called repeatedly for these unions to be registered,” Ryder said. “We believe that through the ratification of conventions 87 and 98, Korea can move forward to resolve these problems and in doing so bring itself into line with good international practice on what I repeat are matters of human rights.”

“When I met President Moon Jae-in yesterday, I know from his electoral commitments that he wishes for Korea to ratify these conventions and we discussed the process to lead in that direction,” he said.