Images of brutal attack of a girl rock the nation

Images of brutal attack of a girl rock the nation 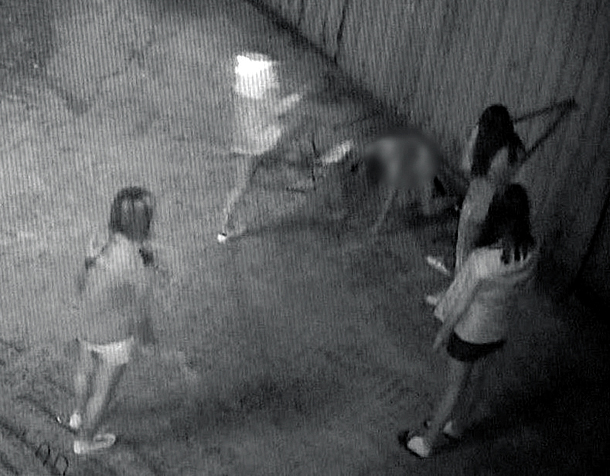 A screen capture of CCTV shows a gang of teenage girls attack another girl of their age as a mob. The victim’s mother later released more photos, including two of deep scars on her daughter’s head, and her severely swollen face. [YONHAP]

A brutal gang attack of a 14-year-old girl in Busan has rocked the country after a photo of the victim covered in blood and kneeling on a concrete floor went viral this week.

The suspects, all female teenagers about the same age as the victim but from different middle schools, testified that they attacked the victim after she was accused of flirting with one of their boyfriends.

The photo, initially uploaded on Facebook Sunday by a friend of one of the four suspects, inspired tens of thousands of Koreans to sign a petition on the Blue House website demanding an amendment to the Juvenile Act.

All four of the alleged attackers are subject to the law, under which criminal response to misconduct is generally more lenient than that towards anyone above 18 years of age.

The case has gained even more attention after the victim’s mother released more photos, including two of deep scars on her daughter’s head, and her severely swollen face.

Facing mounting pressure, Busan’s education office said Tuesday it would launch a week-long “special inspection” into whether any other school violence in Korea’s second largest city has escaped attention.

But that decision has not satisfied the over 140,000 people who joined the Blue House petition so far, and their number is rapidly rising as more details of the assault become known.

It all started this past weekend when a teenager who was friends with one of the four suspects uploaded a Facebook messenger conversation between herself and the suspect online, which included a photo of the victim kneeling and covered in blood.

“Was I too harsh?” the suspect asked. “Do you think I’m going to get jailed?”

On Sunday, the screen shots were posted to a community group page for Busan’s Saha District, where the beating took place, quickly spreading to other local portal sites from there.

Busan police said they were already aware of the incident, and that the case occurred last Friday at around 8:30 p.m. in an alley near a factory, where four girls testified that they beat the victim for about an hour and a half with glass bottles, construction materials and a chair.

After the suspects left the scene, a passerby who saw the victim called the police and she was taken to a nearby hospital. Two of the suspects turned themselves in that night.

It was only after police retrieved CCTV footage from the area that they learned on Monday there were two more girls who took part in the assault.

All four are being investigated on charges of assault.

Police said Tuesday that a pre-trial detention warrant has been requested for two 14-year-olds who inflicted the most damage. The other two, ages 13 and 14, were booked without physical detention.

Under South Korea’s Juvenile Act, which covers anyone from 10 to 18, those from 10 to 13 are “protection cases” who do not face criminal trials.

Instead, a family or district court’s Juvenile Department hands down one of 10 rulings, which range from consigning the juvenile to his or her guardian to transferring the person to a juvenile reformatory for no more than two years.

The most severe level of punishment the three other suspects can receive is 15 years in jail, which normally corresponds to a conviction that would carry the death penalty or life imprisonment if it were committed by an adult.