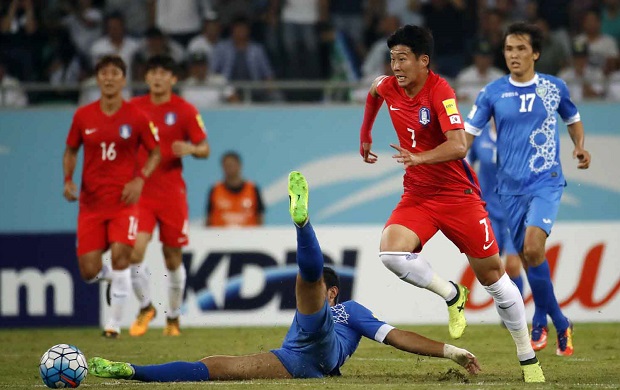 Korea advanced to their ninth consecutive FIFA World Cup following a scoreless draw against Uzbekistan in their final qualifying match here on Tuesday.

The teams traded 30 shots without landing one in the back of the net at Bunyodkor Stadium, but Korea earned to right to compete at the 2018 World Cup in Russia after Iran and Syria ended in a 2-2 draw.

Korea finished in second place in Group A of the final Asian qualifying round with 15 points from four wins, three draws and three losses. Iran won the group with 22 points.

Korea's consecutive World Cup appearance is the longest such streak in Asia and tied with Spain for the fifth longest overall. The European qualification is still ongoing and Spain are trying to advance to their 10th straight World Cup.

Korea entered this contest sitting two points above Syria and Uzbekistan, but still controlled their own destiny. A win would have clinched the World Cup berth outright, but the draw meant Koreans had to hold their breath and wait for the Iran-Syria match to finish a few minutes later.

Only the top two teams earned automatic World Cup berths, with the third-place team falling into a playoff against the No. 3 seed from Group B for a final chance to qualify.

Korea have played in every World Cup since 1986.