The Korea Baseball Organization’s free agent market is about to get shaken up as rumors suggest that some of Korea’s major league stars may be considering a return to the local league. 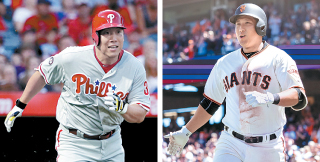 From left, Kim Hyun-soo of the Philadelphia Phillies and Hwang Jae-gyun of the San Francisco Giants are both considering returning to the Korea Baseball Organization as free agents next season. [AP/YONHAP]

Last year, the KBO’s FA market broke records, with Choi Hyoung-woo moving from the Samsung Lions to the Kia Tigers for a deal exceeding 10 billion won ($8.8 million), the largest in the league’s history. While Choi was the first FA to sign a four year contract over the 10 billion won mark, other lucrative deals went to big names like Yang Hyun-jong of the Kia Tigers, Cha Woo-chan of the LG Twins, Kim Kwang-hyun of the SK Wyverns, Woo Kyu-min of the Twins and Kim Jae-ho of the Doosan Bears.

At the start of the 2017 season, 13 FAs signed contracts totaling 70.3 billion won, a huge step up from the year before, when 21 FAs signed deals totaling 76.6 billion won. Since so much money was spent per player last year, fans expected a fairly quite FA market this year, with only three big names ending their current contracts; Son Ah-seop and Kang Min-ho of the Lotte Giants and Min Byung-hun of the Doosan Bears.

But that is about to change, as some of the Korean players in the major league are silently preparing their return.

Hwang Jae-gyun of the San Francisco Giants was the first to decide to return. When Hwang became an FA in the KBO last year he turned down all the offers at home and headed to the United States to sign on with the minor league Giants. Though Hwang wasn’t guaranteed a spot in the major league, throughout the spring training exhibition games, which he played under invitation, he recorded a 0.353 batting average with six home runs and 13 RBIs.

Despite Hwang’s performance, he had to start his season in the minor league and it wasn’t until June that he made his major league debut. Hwang received a lot of attention after hitting a home run in his first major league appearance, but he failed to perform in the next 18 games - recording a 0.154 batting average with home run and five RBIs.

As a result the Giants assigned Hwang as a designated free agent, and he was sent back to the minors.

Hwang is likely to be given some very good offers as he returns to the KBO as an FA, as there aren’t many infielders in the FA market other than Kim Min-sung of the Nexen Heroes.

Kim Hyun-soo of the Philadelphia Phillies also has a high chance of returning to Korea.

Kim signed a two-year contract at $7 million with the Baltimore Orioles in 2015. After struggling at first, he quickly found his spot on the Orioles’ roster with a 0.302 batting average, six home runs and 22 RBIs for the season. But this year he failed to make it into the starting rotation and was traded to the Phillies.

Though Kim recorded a multiple hits in two consecutive games and increased his batting average to 0.234, it’s likely he will have a better offer with the KBO clubs, as he will be a free agent.

Considering Kim is still a relatively young infielder in the KBO, he may well be the league’s next 10 billion won signee.