Ryu Hyun-jin holds his own despite loss for Dodgers

Ryu Hyun-jin holds his own despite loss for Dodgers

Ryu Hyun-jin of the Los Angeles Dodgers had another no-decision game against the Arizona Diamondbacks at Dodger Stadium on Tuesday. Despite the no-decision, the Dodgers still lost 3-1 to the Diamondbacks, their fifth loss in a row. 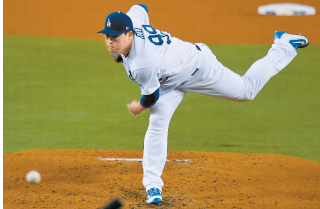 Ryu Hyun-jin of the Los Angeles Dodgers watches a pitch during the game against the Arizona Diamondbacks at Dodger Stadium on Tuesday. [AP/YONHAP]

After a disappointing performance in the previous game Ryu mixed up his pitching on Tuesday, throwing sliders more than he has been recently. Ryu has shown much more control when throwing cutters in the second half of the season, and his infamous slider - long considered his strongest pitch - rarely makes an appearance anymore. The new approach seems to be working - Ryu has picked up two wins and a loss with a 2.77 ERA in seven games in the second half of the season.

Ryu’s first three innings were close to perfect. In the third he managed to strike out three batters with only 12 pitches. Up until the third inning, rather than cutters and curves, Ryu competed against the Diamondbacks’ batters with fastballs reaching 151 kilometers (93 miles) per hour, and sliders at an average speed of 130 kilometers per hour. Of the 52 pitches made in the first three innings, Ryu threw 16 fastballs and 11 sliders.

Aside from the fourth, where Ryu gave up an RBI double to Daniel Descalso, he showed far better control in his pitching than recent games.

Looking closer at the statistics, Ryu gave up more walks - five - on Tuesday, but his performance was rated higher than it was in the previous game, where he only gave up three runs, as he seemed a lot more comfortable and consistent in his pitching.

Ryu didn’t give up any more runs in the remaining innings and after making a total of 100 pitches in six innings, Ryu was replaced by Ross Stripling at the top of the seventh while the Dodgers were tied at 1-1. With that, Ryu has picked up five wins and seven losses and has once again lowered his ERA from 3.71 to 3.59. Throughout the six innings, Ryu gave up three hits, five walks and one run while striking out seven.

Although Ryu has shown inconsistency in pitching since his left shoulder surgery in 2015, it didn’t take that much time for Ryu to get himself out of trouble. With less than a month remaining until the end of the season, Ryu is still competing against Rich Hill and Kenta Maeda for the last spot in the Dodgers’ starting rotation. With the team in a five game losing streak, Ryu has increased his chance of remaining in the lineup and possibly the postseason, as Hill gave up two runs in six innings against the Diamondbacks on Monday.