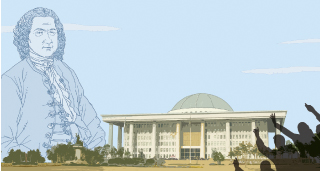 “The people of England regards itself as free; but it is grossly mistaken; it is free only during the election of members of parliament. As soon as they are elected, slavery overtakes it, and it is nothing,” wrote Jean-Jacques Rousseau.

So it is relevant that President Moon Jae-in mentioned direct democracy. He is completely right to say, “People are not satisfied with indirect democracy. As a result, Korean politics is backward. People call for direct democracy of expressing political opinions with candlelight and make proposals through online posts.” Of course, the president has a hopeful intention to use the national support to overcome the limits of a ruling party that does not hold a majority.

The opposition made unfair attacks on this remark as “dismissing the National Assembly” or “denying representative democracy.” It is pathetic for the biggest opposition party to mention “the president bypassing the National Assembly” when it began the session with a boycott even during the North Korean nuclear crisis. In fact, direct democracy is not a denial of representative democracy, but a necessary supplement.

It is too late to regret the wrong choices, and not much will change by voting for others three years later. The party leaders dominate candidates’ nominations, and the choice of the voters is often narrowed down to approving or disapproving the nomination. It is obvious who such a lawmaker will be faithful to. Not so long ago, a shamelessly named Pro-Park Alliance was created and someone who went against the party leadership to listen to the voters was called a traitor and did not get the party’s nomination. The reform committee would openly make “strategic nominations” as a part of the reform.

In this situation, the legislation process becomes a formality. A few party leaders set major policies and bills, and the lawmakers table bills that benefit their interests rather than the will of the people. Even a bill to postpone taxation on religion-related earnings is proposed when the public’s support is clear and the government has long been prepared for it.

It has become clear that the president has a point and Rousseau’s saying is the truth. The alternative option is direct democracy. We can clear up a few misunderstandings. Direct democracy is often denied for three reasons: it could incapacitate the representative system, it only works in a city state like ancient Greece and it could become mobocracy.

It is an outdated idea to limit direct democracy to a city state. Today, voters don’t need to get together. The information technology unimaginable a century ago enables online forums and online voting to take place freely. Lawmakers and parties competing against the people will try to provide as much information on current issues as possible to persuade the voters. This is political reform.

We have experienced the politics of arrogance by the political elites who go against the people, and it is more frightening than mobocracy. We need properly installed direct democracy to prevent the arrogant dominance of the elites. For example, a typical plebiscite like Article 128 of the Constitution, “A proposal to amend the Constitution shall be introduced either by a majority of the total members of the National Assembly or by the president,” must be eliminated. Since Park Chung Hee’s Yusin Constitution replaced “people” with “president,” the article has been a notorious case of unjust law. The power should be returned to the people, the original owner.