All Galaxy Note8 models to cost over 1 million won

All Galaxy Note8 models to cost over 1 million won 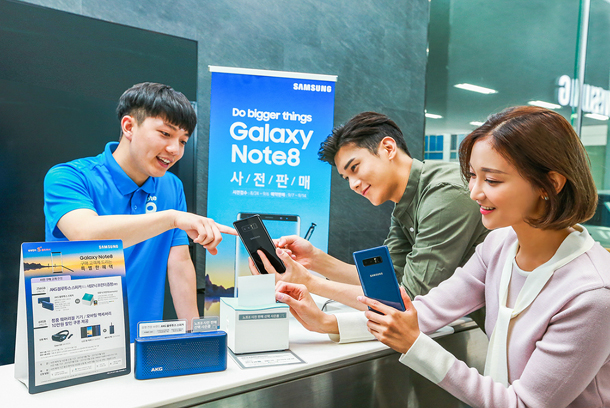 Models pose with the Galaxy Note8, which will be available for preorder from today until Sept. 14. [SAMSUNG ELECTRONICS]

Previously the most expensive model from Samsung was the Galaxy S8+ with 128 gigabytes of storage, which Samsung released in April for 1,155,000 won.

The Note7, the predecessor of the Note8 that was prone to catch fire and was eventually recalled and discontinued, cost 988,900 won for the 64 gigabytes model. Outside of Korea, the Note8 starts from $929.99.

Koh Dong-jin, president of Samsung’s mobile communications business, emphasized in a meeting with reporters last month the “meaningful innovations” with the new phone, saying it “will be really hard not to see the numeric 1 at the beginning of the price figure.”

Samsung can expect to have to once again compete against Apple as early as November. Apple is scheduled to take the wraps off the much-anticipated 10th anniversary iPhone on Sept. 12 and sales in Korea might open two months later.

There have been prolific rumors about the new iPhone - nicknamed the iPhone X. 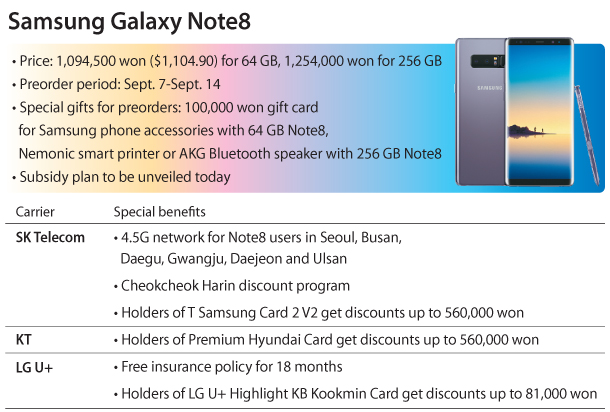 Experts predict the device will be equipped with no physical home button, an OLED screen with minimized bezel and facial unlocking technology. Some observers say it will cost more than $1,200.

UBS analysts Steven Milunovich and Benjamim Wilson said in a note to investors on Tuesday, however, they were skeptical about the rumor and projected the pricing in the $900 range.

All three mobile carriers in Korea scrambled to come up with promotions for the Note8 on Tuesday, but the discount plans - which vary by company - will be unveiled today.

Top player SK Telecom has the most to offer. It is giving Note8 users in six metropolitan cities - Seoul, Busan, Daegu, Gwangju, Daejeon and Ulsan -the opportunity to use its 4.5G network. The network is an interim system that precedes the adoption of 5G and makes it possible to download a 1-gigabyte high-definition movie in just 10 seconds, seven times faster than the current long-term evolution network.

Those who sign up for the Cheokcheok Harin program at any of SK Telecom’s phone stores will have money deducted from their monthly phone bills proportionate to the amount they have spent at the shopping mall and gas stations.

With a two-year phone subscription, up to 200,000 won can be deducted from phone bills overall. SK Telecom plans to ink additional partnerships with other retailers including convenience stores.

The three carriers also launched a program that will allow Note8 buyers to switch to new phones under the Galaxy brand after between 12 and 18 months - depending on the carrier - and receive back half of the amount they paid toward the Note8 up to that point. They will have to return the old Note8.

In Korea, the majority of smartphone users subscribe to a two-year phone contract and pay the cost of the device in monthly installments.

Aside from mobile carriers, Samsung is giving away 100,000 won gift cards for Samsung accessories to those that place preorders for a 64-gigabyte Note8 and either a Harman AKG Bluetooth speaker or Nemonic portable mini printer, set to cost around 170,000 won, for preorders of the 256-gigabyte model. Preorders run until Sept. 14 and delivery starts on Sept. 15.