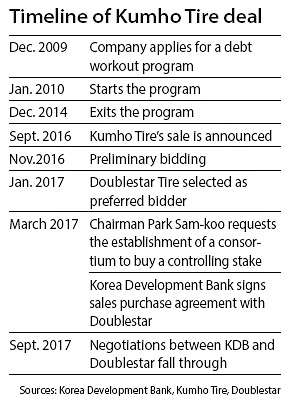 The sale of Kumho Tire is on the brink of collapse, with the company’s creditors failing to reach an agreement on the price with bidder Doublestar.

The Korea Development Bank, the main creditor of Kumho, said Wednesday that it will send a document requesting the nullification of a stock purchase agreement to the Chinese suitor.

If Doublestar accepts the request, the deal will officially end, a scenario that seems likely.

“Creditors already agreed to demand the termination of the deal,” a source at the Korea Development Bank said. “The document can be sent sometime next week, though a specific schedule has yet to be decided.”

The source blamed Doublestar’s demand for a discount.

“Doublestar constantly tried to lower the price. If they step back from their demands and reject the nullification agreement, the bidding process can go on as scheduled. But that seems unlikely for now,” the source said.

Then Doublestar requested a further discount of 80 billion won in case Kumho’s third quarter earnings worsen, bringing the price down to 720 billion won.

When Doublestar first signed a deal with Kumho Tire creditors in March, it agreed to pay 14,389 won per share for a controlling stake of 42 percent. When the announcement came out on March 13, the shares closed at 8,770 won.

But the stock has plunged ever since. In August, the share price dipped to the 6,000 won range and went on to decrease to 5,350 won on Wednesday, down 18.69 percent from the previous trading day.

Analysts said the news that the deal is falling apart affected the share price, marking a new 52-week low.

As a sale of Kumho now appears distant, the Korea Development Bank said it will demand Park Sam-koo, chairman of Kumho Asiana Group, and the company’s management come through with turnaround measures.

“As the deal didn’t turn out to be successful, there is talk of a possible debt workout and management crisis,” the state-run bank said in a statement.

Park told reporters on Wednesday that he is mulling rescue measures.