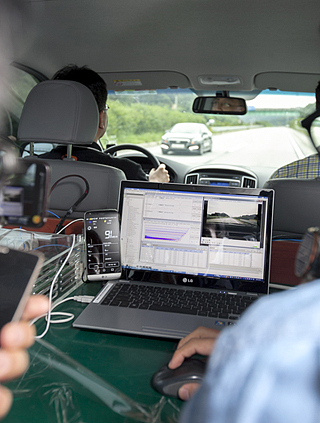 Researchers from SK Telecom and LG Electronics monitor video sent by a car moving in front while testing their jointly developed “vehicle-to-everything” technology on a test road in Yeoju, Gyeonggi, on Tuesday. [SK TELECOM]

SK Telecom and LG Electronics have jointly developed and tested a so-called vehicle-to-everything platform that allows cars to “talk” to each other and automatically respond to obstacles in their environment.

The platform runs on the LTE network and allows vehicles to share traffic information with nearby cars, control centers and various surroundings via sensors. The technology is considered vital in the development of self-driving cars because it gives vehicles access to a wider range of data than just those from cameras and sensors attached to a single car.

A dry run was completed Tuesday on a test road operated by the Korea Expressway Corporation in Yeoju, Gyeonggi, SK Telecom said in a statement Wednesday. The telecom company contributed the LTE network and communication system connecting the car with other sensors, and LG Electronics developed the modem.

The companies pointed to two services in particular that vehicle-to-everything technology provides. One is what the developers call a “see through” function that allows cars up in front to send videos of traffic situations to vehicles in the back, helping them better prepare for and avoid hazardous situations or barriers on the road.

“The technology is especially useful when large vehicles like trucks or buses are blocking the view in the back,” SK Telecom said.

Another service, called “intersection movement assistance,” can warn cars heading toward an intersection of unexpected obstacles like jaywalking pedestrians or broken traffic lights based on video captured from closed-circuit cameras installed on the road.

SK Telecom and LG Electronics plan to further develop the technology and commercialize it for use on general LTE networks. They hope to eventually upgrade the technology to work with 5G networks.

“We are focusing on developing vehicle-to-everything technology as well as high-definition 3-D maps and artificial intelligence-powered computing technology for autonomous driving to ultimately make a society without traffic accidents,” said Park Jin-hyo, head of SK Telecom’s network technology research and development center. “We will expand partnerships with various companies to expand the ecosystem for the ‘connected car’ industry.”