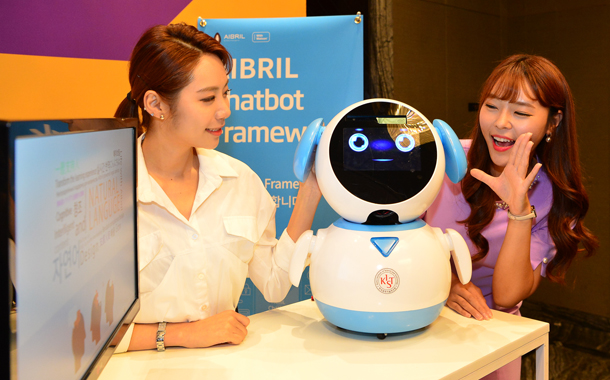 SK C&C demonstrates a chatbot powered by its AI platform Aibril during a launch event in Seoul on Wednesday. [SK C&C]

IBM Korea and its local partner SK C&C are hoping to shake up the local enterprise software market with the American tech giant’s famed Watson supercomputer.

SK C&C, which helped “teach” Korean to Watson, is marketing the software with IBM Korea under the name Aibril. Watson and Aibril share the same basic AI interface, but SK C&C hopes to use Aibril to generate more cases in Korea and demonstrate the effectiveness of artificial intelligence in business.

For instance, clients can adopt the conversation API to develop a customized chatbot or digitize their call centers.

SK C&C pointed to Japan’s SoftBank, which used Watson to screen applications during recruitment. In 15 seconds, Watson went through a batch of applications that originally took a human resources officer about 15 minutes, a spokesperson from SK C&C said.

Multiple APIs can also be used together to upgrade business processes, the company said.

For instance, online shopping sites can make use of both the personality insight API and visual recognition API to analyze customers’ product preferences based on pictures uploaded on their social media profiles.

According to IBM Korea, one of its clients, Lotte Group, is upgrading its shopping adviser robot using Watson’s Korean version to offer a customized shopping experience for local customers.

“Korean companies now have a way of developing AI-based services easily,” said Lee Mun-jin, head of the Aibril business division at SK C&C. “The APIs are currently used mostly by our business partners in finance, health care, retail and services, but we expect all industries to start adopting AI in their businesses.”

The companies plan to release additional APIs for speech-to-text and text-to-speech recognition by the end of this year. “Voice recognition has been more difficult for Watson to learn because subtle nuances in Korean can change the meaning of a sentence,” an SK C&C spokesperson said.