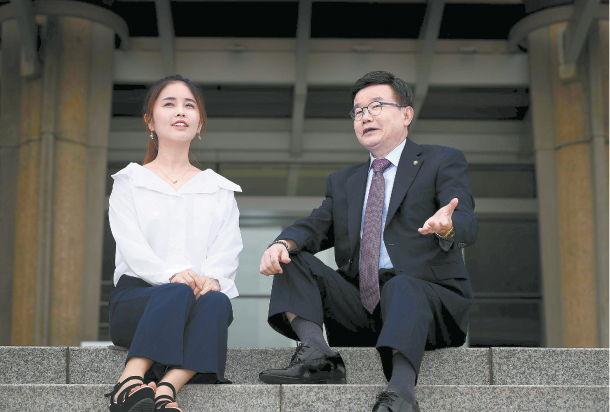 There are heated controversies over why Lim Ji-hyun, a 25-year-old defector from North Korea, went back to the country after enjoying celebrity in South Korea. Lim, who is also known as Jeon Hye-sung in North Korea, starred on multiple TV shows in Korea that invited on female defectors from the North. But then she suddenly disappeared and started appearing in North Korean propaganda TV shows against South Korea.

There is speculation regarding her return to the North, with some saying she must have been kidnapped. The issue remains a mystery, but it raises questions about how South Korea treats the roughly 30,000 North Korean defectors who settled here as of last year.

To gain insight, the JoongAng Ilbo sat down with Ahn Chan-il, a North Korean defector to South Korea who serves as the head of the World North Korea Research Center and Kim Eun-sil, a 23-year-old female defector who has lived in Korea for 2 years and recently started appearing on South Korean TV shows. While most of the answers are from Ahn, Kim’s remarks are noted in quotes.

A. Lim defected from North Korea when she was 19 years old. She lived together with a guy in China, then moved to Korea alone. Then, the guy who had played the role of broker for North Korean defectors was arrested by the North’s Ministry of State Security. I heard he made a deal to be freed. During the investigation, the North found out about the existence of Lim Ji-hyun and planned a trap to kidnap her. Lim was found to have been caught in the trap.

But there must be a reason she went back to China in the first place.

From what I heard, the guy lured her saying she could make a fortune by starring in pornographic material in China.

North Korea’s propaganda against South Korea is very strong. In August, Lim appeared two times on North Korean TV to criticize South Korea. Is there a reason for her appearance?

South Korean TV programs that bring a group of North Korean female defectors on and speak negatively of North Korean society have been a great pain in the neck for the country. There were rumors circulating that North Korean leader Kim Jong-un gave orders to bring some of those females back to the country earlier in the year. It seems North Korea succeeded in fishing a large star like Lim Ji-hyun.

Is it possible Lim went back on her own?

Lim’s TV interview, saying how she suffered from poverty [in South Korea], is a complete lie forced by North Koreans. When Lim was here, she earned about 7 to 8 million won ($6,170-$7,050) by appearing in TV shows. If she had made up her mind to go back to North Korea, she would have sold her foreign car before leaving. Even $1,000 is big money in the North. I hope no one is blinded by the propaganda sent by Pyongyang.

There are speculations Lim might come back to South Korea. Is that possible?

North Korean defectors who taste the sweetness of a world of freedom and then walk back into the North is like walking out of jail and then walking back in. There must be severe overseeing on her move but there are possibilities that she may defect from the country in one or two years time. There are quite some examples like that.

Lim claimed she was forced to lie while starring in South Korean TV shows — is that true?

I have experience of being on South Korean TV programs and they don’t force you to make up stories. Of course, sending out humiliating descriptions about life in North Korea makes North Korean casts ashamed and also gives the wrong impression of the North to people in South Korea. I am actually gathering ideas to produce a new TV program with some North Korean figures and a cable TV network to come up with a totally different North Korea-related TV show.

“Editors write program scripts based on prior interviews with us,” Kim said. “Of course they put flesh on the bones, but they basically just make our naïve words into nicer descriptions.”

According to Kim, it usually takes about five to six hours of shooting for a program, but all the cast participates happily because they are willing.

“Some people criticize us, saying we make money by selling stories about the home country or that we mistake ourselves as if we have become celebrities, but we have to bear those sour remarks.”

How should South Korea react to the incident? It’s not like the country can completely ban defectors from overseas travels.

Many defectors hope to visit China again, especially the routes they used to escape from North Korea. It is sort of an alternative to alleviating their nostalgia because they cannot visit North Korea. There will be opposition [from defectors] if they can’t issue passports for overseas travel. However, North Korea will make persistent attempts to make the second and third cases of Lim Ji-hyun. However, even if somebody lures defectors to near the border lines of the North or China saying they can meet their families, they should never go. [South Korea] needs to come up with measures to discourage overseas travel especially for North Korean defectors that have appeared in TV shows and if necessary, the country should think of limiting overseas travel.

What do you think about the fact that, during the latest presidential election, some 3,000 defectors from North Korea announced they will leave the country if President Moon Jae-in is elected?

(Laughter) No one actually left. But I feel pity about the crack the election left in the defector community in Korea. Defector organizations are largely responsible [for creating disputes], but the political sphere also played a role in breaking them apart. Especially under the Park Geun-hye administration.

I quite don’t understand. Traditionally, conservatives have taken more care of defectors, haven’t they?

Is that the reason you participated in the Moon camp during the election campaign?

I was made head of the camp’s unification policy advisory group. I played the role because I though I should bring together the defector groups. I plan to play such roles in the future, as well.

Another controversial issue with North Korean defector organizations is their sending propaganda leaflets to North Korea. What are your thoughts?

I am not against it in principle, but I think they should avoid sending overly aggressive messages or those that harm peaceful cooperation between the two countries.

It shouldn’t be a way of showing off, as some heads of defector organizations seem to see it. I hope the organizations send messages to the North in the sincere hope that outside news is delivered to North Koreans.