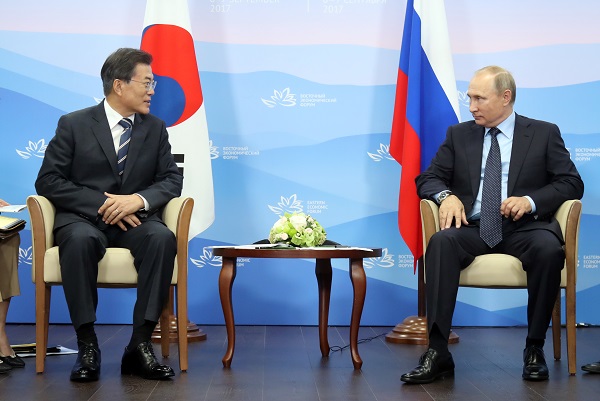 South Korean President Moon Jae-in, left, and Russian President Vladimir Putin, right, have a bilateral summit meeting on Wednesday in Vladivostok on the sidelines of a regional economic forum hosted by Russia. In the meeting, two leaders called for efforts to stop North Korea from making any further provocations, calling it the most urgent challenge facing their countries and the rest of the world. [YONHAP]

President Moon Jae-in’s attempt to get Vladimir Putin to put greater pressure on Pyongyang failed Wednesday as the Russian president said he opposed cornering the North with “emotional” sanctions.

Moon and Putin’s failure to agree was evident when the two leaders addressed the press after a summit in Vladivostok on the sidelines of a regional economic forum hosted by Russia.

“Russia does not and will not tolerate a nuclear-armed North Korea,” Putin said, criticizing the Kim Jong-un regime’s nuclear test on Sunday. “We must not be overwhelmed by emotions and drive the North into a dead end,” he continued. “We must act cold-headedly and avoid any measures that will escalate tensions.”

The test of what Pyongyang called a hydrogen bomb on Sunday forced Moon into dramatic shifts in his North Korea policy. Seoul is downplaying the idea of dialogue, which Moon championed previously, and is increasingly turning to tougher military and economic actions to pressure Pyongyang, such as an agreement with Washington to lift limits on payloads allowed on South Korean missiles.

Putin said Wednesday Russia is not interested in participating in stronger economic sanctions on the North. “The North Korean nuclear issue cannot be resolved by pressures and sanctions alone,” he said. “Without political and diplomatic resolutions, it is impossible to resolve the current situation.”

The remark was a clear rejection of Moon’s requests. During a phone talk with Putin on Monday, Moon revealed a glimpse of the key points to be proposed in upcoming UN sanctions and asked for Moscow’s support. He asked Putin to support sanctions such as an oil embargo and a ban on North Korea’s labor exports.

In July, China and Russia protested a proposal of an oil embargo when the United Nations discussed a new resolution.

According to Yoon Young-chan, Moon’s senior press secretary, Moon made a particularly earnest request to Putin during the summit to support an oil embargo this time but was rejected. Moon reminded Putin of a precedent: China’s three-day cutting off of oil in 2003, which forced the North to attend six-party talks.

“No matter how hard we press, the North won’t give up the nuclear weapons to protect its security. Russia only exports a tiny amount of oil to the North, about 40,000 tons a year,” Putin was quoted by Yoon as telling Moon. “We oppose and condemn the North’s nuclear development. But we are concerned that cutting oil supply will hurt civilians and places such as hospitals.”

Putin also said Russia and China created a roadmap to resolve the nuclear crisis, and asked concerned countries to pay attentions to it.
Putin’s rejection for Moon’s pleas for help was not a surprise.

“Russia believes that the policy of putting pressure on Pyongyang to stop its nuclear missile program is misguided and futile," Putin wrote in a letter published on the Kremlin’s website last week. Urging the problems be settled through dialogue without any preconditions, he said, "Provocations, pressure and militarist and insulting rhetoric are a dead-end road."

Moon’s failure to persuade Putin makes it clear that an upcoming UN resolution to punish the North will be another slap on the wrist. China, the main fuel oil supplier of the North and the largest importer of North Korean laborers, is expected to protest the proposal.

Russia is also a main importer of Russian laborers. They are generally hired in the logging and mining industries, receiving relatively high incomes.

In the joint media session, Moon said he and Putin agreed that it is imperative to resolve the North Korean nuclear and missile crisis, calling it the most urgent and important challenge. He said he will continue strategic communication with Russia to resolve it.

Before the summit, Moon expressed a hope of winning Putin’s support to end Kim’s nuclear brinkmanship, warning that the situation could become “uncontrollable” if they fail to act now.

“Because of the North’s repeated provocations, the international political situation has grown extremely serious,” Moon said. “Unless we stop the North’s provocations now, the situation could sink into an uncontrollable state.”

While the two leaders disagreed on North Korea, their discussion on economic cooperation was more fruitful. They said they agreed to create a free trade zone between Korea and the Eurasian Economic Union. They also agreed on energy cooperation, including Korea’s imports of Russian liquefied natural gas and Korea’s construction of 15 tankers for Russia.

Moon and Putin also said they will try to expand economic cooperation with North Korea to build a trilateral network.

In his opening remark for the summit, Moon said his “new Northern policy,” designed to boost economic cooperation with countries in Northeast Asia and Eurasia, has the same ambitions as Putin’s new Eastern policy. “Korea is the best partner for Russia’s development of Far East,” Moon said. “If the two countries will cooperate, the Far Eastern region will be an outpost of regional peace and prosperity.”

Putin also expressed a hope for improved economic cooperation between Korea and Russia. “Bilateral trade went down by 16 percent last year, but increased about 50 percent during the first six months of this year,” Putin said. “I hope for further cooperation.”

A key project in Moon’s New Northern Policy is linking railways and pipelines of South Korea and Russia through the North. In a speech at the Koerber Foundation in Germany in July, Moon described this vision. “The severed inter-Korean railway will be connected again. A train departing from Busan and Mokpo will run through Pyongyang and Beijing, and head towards Russia and Europe,” Moon said in the speech. “Cooperation projects in Northeast Asia, such as the gas pipeline project connecting the two Koreas and Russia, may also be implemented.”

Connecting the South’s railway with Russia’s Trans-Siberian Railroad, a 9,288-kilometer railway between Vladivostok and Moscow, has been an ambition of all South Korean presidents since Seoul established diplomatic relations with Moscow in 1990.

It has never made progress because North Korea’s participation is a must.

The summit was supposed to start at 1 p.m. Vladivostok time, but had a 32-minute delay due to Putin’s late arrival. The one-on-one summit was originally scheduled for one hour, but the two leaders talked for 80 minutes. They continued on for another 90-minutes with officials to wrap up the summit.