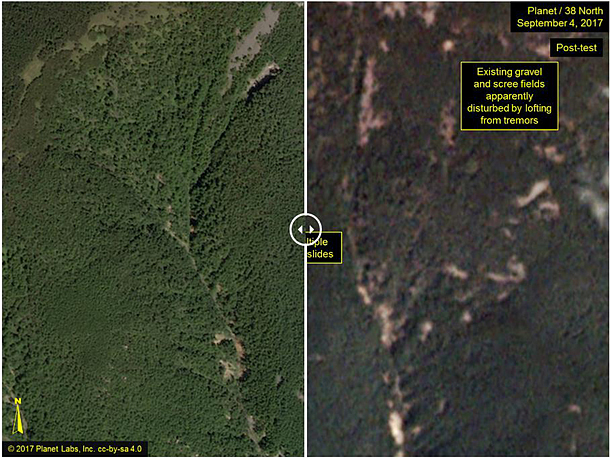 Satellite images of Mount Mantap, where North Korea’s underground nuclear test sites are located, disclosed by 38 North on Tuesday. Many landslides were observed in the image, right, taken after the sixth nuclear test, compared to the image, left, before the test. [YONHAP]

North Korea has blamed the United States for its most recent nuclear test, calling it part of an effort to “eradicate the hostile moves and nuclear threat of the U.S. going on for decades.”

“The wild and belligerent remarks of ‘fire and fury’ let loose by Trump and the frenzied moves of the U.S.,” read an English version of the KCNA report, “testify that the U.S. is indeed the heinous aggressor who is begging for war in defiance of the collective voice of the international community calling for peace and stability on the Korean Peninsula.”

North Korea warned of further military provocations, saying it would respond to Washington’s sanctions and pressure with its “own mode of counteroffensive,” adding that the United States would be held totally responsible for “all catastrophic consequences.”

The United States should not forget, it said, that North Korea is a “full-fledged nuclear power” in possession of atomic and hydrogen bombs, as well as intercontinental ballistic missiles (ICBMs).

The regime has relied on the KCNA for decades to churn out threats against the United States and South Korea, but the latest one comes at an especially sensitive time because South Korea’s spy chief said the North seemed to be preparing for another missile test, possibly an ICBM or intermediate-range ballistic missile aimed at a normal angle towards the northern Pacific.

The test, said Suh Hoon, director of the National Intelligence Service, might be carried out around Saturday, or Sept. 9, when North Korea celebrates its foundation day. Oct. 10, the founding day of the ruling Workers’ Party, was also mentioned as another possible date of the launch.

On Tuesday in Geneva, North Korea’s Ambassador to the UN Han Tae-song said his country was prepared to send “more gift packages” to the United States, while addressing the Conference on Disarmament, saying the recent nuclear and missile tests were presented for none other than Washington.

Han added that the North will carry out more tests as long as the United States refuses to rescind its sanctions against the regime, reiterating that the missile and nuclear development programs will “never, under any circumstance” be negotiable.

The sixth nuclear test on Sunday was indisputably North Korea’s most powerful so far.

According to a report on Tuesday by 38 North, a North Korean affairs website run by the U.S.-Korea Institute at Johns Hopkins University’s School of Advanced International Studies, satellite images of the Punggye-ri Nuclear Test Site, where the experiment was held, showed landslides and other disturbances that were more widespread than any of the five nuclear tests North Korea previously conducted.

But as with all previous detonations, the yield is still not precisely known. Pyongyang has not mentioned a figure, while South Korea’s military predicted it to have been 50 kilotons, or equal to about 50,000 tons of TNT.

Japan’s military officially placed the number at 120 kilotons Tuesday, while a group of scientists at China’s University of Science and Technology estimated it at 108.3 kilotons.

The Norwegian Seismic Array, better known as Norsar, assessed it at 120 kilotons.

By comparison, the atomic bombs dropped on Japan’s Hiroshima and Nagasaki during World War II had yields of 15 and 21 kilotons.