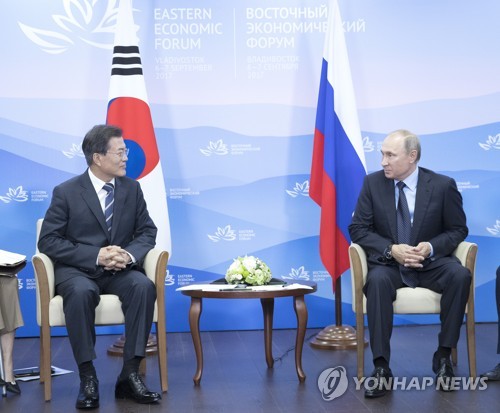 South Korean President Moon Jae-in (L) holds summit talks with Russian President Vladimir Putin in Vladivostok on Sept. 6, 2017. Moon is on the first day of his two-day visit to the Russian city to attend a regional forum. [YONHAP]

South Korean President Moon Jae-in and his Russian counterpart Vladimir Putin held a bilateral meeting here Wednesday for discussions largely expected to focus on how to deal with North Korea and its latest nuclear provocation.

The Moon-Putin summit began shortly after the South Korean leader arrived in Vladivostok on a two-day visit that will include a separate summit with Japanese Prime Minister Shinzo Abe as well as his participation in the Eastern Economic Forum.

The South Korean president has strongly condemned the North's sixth and apparently the most powerful nuclear test so far, calling it a serious violation of U.N. Security Council resolutions that prohibit the communist state from any nuclear or missile activities.

Pyongyang has also staged nine missile tests since the new South Korean leader took office in May. Since the beginning of the year, the communist regime has conducted 14 missile launches.

In his earlier telephone conversation with Putin, held one day after the North's latest nuclear provocation, the South Korean leader stressed the need to put in place additional and stronger sanctions against the North that will leave the country with no other choice but to come to the dialogue table.

Such measures should include completely cutting off oil supplies to the impoverished North, Moon said.

Putin was reluctant to give any immediate response, saying they should talk more when they meet in Vladivostok this week, according to Seoul's presidential office Cheong Wa Dae.

Following their bilateral summit, Moon and Putin will be joined by more than a dozen top government officials from each side for what Cheong Wa Dae called an expanded summit.

The two leaders will hold a joint press conference on the outcome of their summit.