Volleyball pro Kim Hee-jin has no time to rest

Volleyball pro Kim Hee-jin has no time to rest 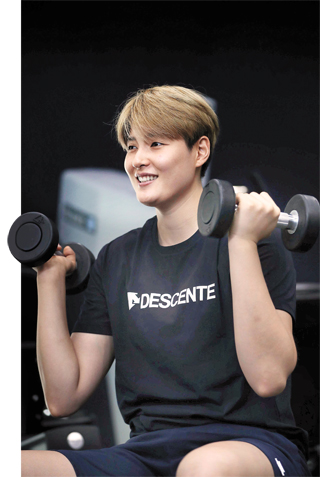 Since Kim Hee-jin was first selected for the Korean national women’s volleyball team at age 18, she has never once missed her spot on the national team, and as of Wednesday, has played in 139 national team games, which is 17 games per year.

This is much more than Kim Yeon-koung, the highest paid player in the world, who has played in 176 games, or 14 per year, since she first joined the national team in 2005.

Kim Hee-jin is the second highest scorer after Kim Yeon-koung on the national team. But starting this year, she has been inconsistent at international events. At the 2017 FIVB Volleyball World Grand Prix in July, for instance, she scored 108 points in 11 games, but at the 2017 Asian Women’s Volleyball Championship, she managed only 60 points in eight matches, due to an elbow injury.

“When I tried to make a serve during the second group match against Bulgaria, I couldn’t put any strength into it,” Kim said. “And my serve just dropped right in front of me. That’s when I realized the seriousness of my injury.” 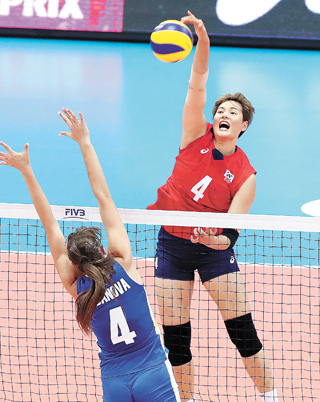 But rather than rest, she played full time in the remaining matches, taking painkillers, as Korea had no players to replace her. Though the full entry required 14 players, Korea had to compete in the Grand Prix with 12 and in the Asian Championship with 13 due to injuries. Kim Yeon-koung observed, “It’s always the same players who suffer tough schedules.”

Making matters worse, during the Asian championship, Yang Hyo-jin had to quit the match early, as she couldn’t stand up after sustaining a back injury. At the time, Kim wasn’t able to straighten her arm due to a torn elbow ligament, but had to stay on the court until the end of the championship.

Despite the injury, when Korea played against China on Aug. 17, Kim Hee-jin scored 16 points, two times more than Kim Yeon-koung.

“This year was a lot harder for me to play for the national team,” Kim said. “I don’t even ask for sufficient financial support. I just wish we could compete in international events with a full roster to take the pressure off players. Looking at other countries, their national teams have two different divisions so they can alternate and make a better transition when senior players retire.”

The reason Kim is playing despite her injuries is because in the V League, foreign players usually play as right-side hitter, which mean there are few Koreans who can play that position on the national team.

“I just think that if I play harder,” Kim said, “the younger players will look up to me and may want to play the right position.”

Upon completion of the 2016-17 season, Kim became a free agent. Along with Yang Hyo-jin, Kim became the highest paid free agent player in the V League, extending her contract with Hwaseong IBK Altos for 300 million won ($265,590).

Though Kim is one of the best players in the V League, she has yet to prepare her 2017-18 season due to the national team schedule. Kim is given a few weeks of break, but within two weeks, she will have to join the national team once again to compete in the Asian qualifier for the 2018 FIVB World Championship in Japan.

“If I can’t use my right, I still have my left arm,” Kim said. “It won’t take me long to get used to hitting with my left arm.”