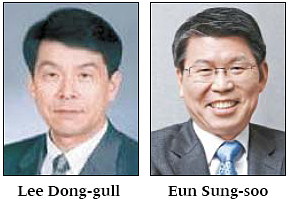 The Financial Services Commission recommended Lee Dong-gull, former head of the Korea Institute of Finance, to lead the Korea Development Bank, and the Ministry of Strategy and Finance tapped Eun Sung-soo, chairman of the board at Korea Investment Corporation, to head the Export Import Bank of Korea.

Nominees for the positions are selected by financial regulatory agencies and submitted to the president for final approval.

The Financial Services Commission said Lee’s experience in academia makes him an ideal leader for the Korea Development Bank, which has been charged with restructuring several struggling industries, including shipbuilding and petrochemicals.

The immediate task facing the nominee will be managing the sale of Kumho Tire, which has been falling apart in recent weeks. The bank is the main creditor of Kumho Tire and has been trying to sell it to Chinese tiremaker Doublestar, but both parties failed to reach a deal on the price.

The bank plans to send a document requesting the nullification of a stock purchase agreement to the Chinese company. If Doublestar accepts the request, the deal will officially end.

Other remaining quandaries include restructuring in the shipbuilding industry, particularly at cash-strapped Daewoo Shipbuilding & Marine Engineering. The company was spared a liquidity crisis after a series of bailouts from state-run banks, but the issue of how to turn around the shipbuilder remains unresolved.

Like Lee, Eun will take his post at the Export-Import Bank of Korea after approval from the president. The 56-year-old also graduated from Seoul National University with a bachelor’s degree in economics. While at the Ministry of Finance and Strategy, he earned a doctorate from the University of Hawaii.

He became head of Korea Investment Corporation in 2016.