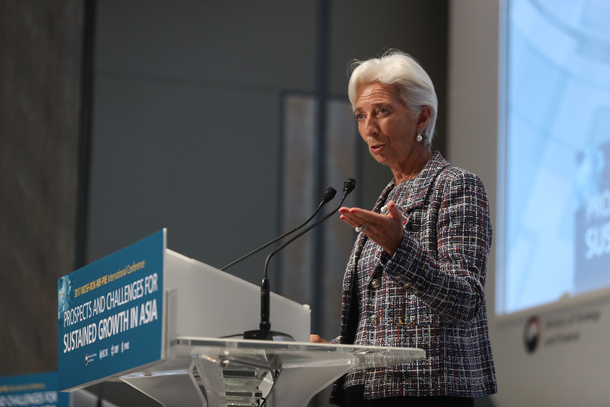 Christine Lagarde, managing director of the International Monetary Fund, delivers a speech during a joint conference hosted by the Bank of Korea and the Ministry of Strategy and Finance at the Four Seasons Hotel in central Seoul. [BANK OF KOREA]

The chief of the International Monetary Fund called for more women in the workforce on Thursday to bolster low-growth economies in Asia, citing government data that reducing the gender gap will increase Korea’s gross domestic product by 10 percent.

Christine Lagarde, the managing director of the IMF, suggested that aging populations were one of the greatest risks facing Asian countries at a conference jointly hosted by the Bank of Korea, the Ministry of Strategy and Finance and the Peterson Institute for International Economics.

“There are also rapidly aging populations in countries such as China, Japan, Korea, and Thailand. They will have smaller workforces in the future and potentially lower productivity growth,” she said, adding that a lower annual GDP might be one of the negative consequences.

One of the main solutions she suggested includes bringing more women into the workplace to enhance productivity and reduce income inequality.

“One avenue that has worked in all countries around the world is to boost the proportion of women in the workforce… By some estimates, closing the gender gap in the labor market could boost GDP by 9 percent in Japan, 10 percent in Korea, and 27 percent in India,” the Lagarde said.

Despite progress in recent years, Korea has one of the lowest female labor force participation rates among Organization for Economic Cooperation and Development member countries at 58.4 percent as of 2016, far below the OECD average of 66.8 percent.

Korea also has the highest wage gap between male and female workers compared to OECD countries, with a 37.2 percent discrepancy in 2015.

Lagarde struck a complimentary note on the Moon Jae-in administration’s push to support marginalized groups in the society such as seniors and young job seekers.

“Here in Korea, the Parliament recently approved a budget that includes transfers to the elderly, subsidies for job-seeking youth, and higher unemployment benefits,” she continued. “A stronger social safety net - including a more reliable pension system - is also crucial for China, because it facilitates the transition to consumption-led growth.”

The remarks by the female chief followed a speech by Governor Lee Ju-yeol of the Bank of Korea.

The governor stressed the need to shift the country’s growth paradigm from one that focused on quantitative output to a more qualitative, innovation-driven expansion.

He also focused on the idea of “economic rebalancing,” where export-led growth gives way to more balanced contributions by both exports and domestic demand.

“We need to move from export-led growth to growth characterized by a balance between exports and domestic demand,” the governor said.

Renowned professors - including Joel Mokyr from Northwestern University - and economists from the IMF attended the sessions to discuss the main theme, “Prospects and Challenges for Sustained Growth in Asia.”

The conference will run through today at the Four Seasons Hotel in Gwanghwamun, central Seoul.