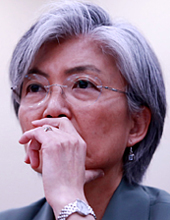 Reform is a hard task. There have been various attempts in the Roh Moo-hyun, Lee Myung-bak and Park Geun-hye administrations, but all the efforts failed. So when President Moon Jae-in appointed foreign minister Kang Kyung-wha in June, he asked for further reform.

Moon pointed out two issues. While the foreign ministry has some of the top elites of the country, the closed structure and hierarchy among officials who passed the foreign service examination limited the diplomatic capacity from growing alongside the nation. Also, foreign policy has focused on relations with the four powers — the United States, China, Japan and Russia — and failed to make creative changes.

The reform plan that Minister Kang will present will probably include expanding the entry of external people to break the hierarchy among diplomats and the diversification of diplomacy outside the four powers to the EU, India and the Association of Southeast Asian Nations. Here, the foreign ministry’s staff expansion plan will be in tune with Moon’s “big and competent government.”

What is the key to reform? A creative foreign ministry should pursue national interests over the interests of the administration.

Most notably, the missions — the frontline of diplomacy — often produce reports that suit the Blue House’s policy direction. If the Blue House’s North Korea policy is geared toward dialogue, reports supporting talks are created no matter what policymakers and public opinions in the resident country think. It works the same way if the focus is on pressure. Only a few months ago, a diplomat reported public opinion supporting pressure, and after the administration changed, the same diplomat wrote a report on how talks are gaining support.

In such an atmosphere, a report that contains the position of the resident country accurately despite discrepancies with Korea’s policy direction is not approved by the head of the mission. The diplomat who challenges the convention is often ridiculed or scolded.

Diplomats who are accustomed to the practice instinctively know that they will suffer more disadvantages in their career and inconvenience in their daily life if they make accurate reports. They only want to avoid a diplomatic catastrophe of the truth being revealed while they are in office. Korea makes key policy decisions based on these inaccurate reports.

Kang’s reform plan should include a strict evaluation system of encouraging accurate reports and reprimanding diplomats who submit misleading ones. If not, the reform plan will be scrapped with a reshuffle of high-level officials among the heads of the missions that suit the taste of the next administration. And the next administration will reproach the foreign ministry and demand reform again.