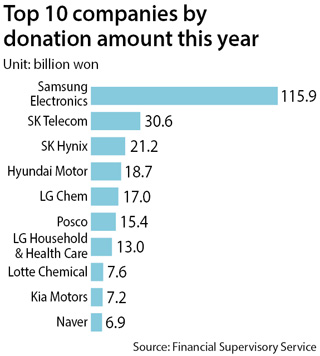 Conglomerates in Korea have become stingier about making donations. In the wake of the Choi Soon-sil scandal, companies are scared of being criticized for seeking favors or offering bribes, leading to a massive drop in the amount of money given away.

The companies fear that they might get criticized for making implied favors with the donated money, let alone getting credited for doing good deeds.

Korea’s top 20 companies by market cap donated significantly less in the first half of this year compared to the last year, according to data from the Financial Supervisory Service.

Experts believe that the Choi Soon-sil scandal, and in particular the allegation that chaebol made donations to Choi’s nonprofit foundations as a form of bribery, is the reason that leading conglomerates have apparently become less generous.

Samsung Electronics, Hyundai Motor, SK Group and Posco, all of which have been associated with the scandal for making allegedly ill-intentioned donations, have downsized their donations this year.

Samsung Electronics, the country’s most valuable company, donated 116 billion won in the first half of this year, 19 percent less compared to the same period last year. Considering the fact that Samsung Electronics’ revenue has been posting a continuous rise, it is obviously not cash flow that has caused the electronics giant to reduce its donations.

“The social opinion of companies making donations has deteriorated. The public don’t see it for pure purposes,” one industry insider said.

“Conglomerates don’t want to be criticized for making donations,” the insider added.

The lack of donations is also impacting the upcoming 2018 PyeongChang Winter Olympics as well. The organizing committee estimated its operation fees will amount to 2.8 trillion won, but said it is currently short 300 billion won. No private companies are voluntarily making donations so public companies like Korea Electric Power Corporation have decided to throw in 80 billion won at the last minute. Even this only came after President Moon Jae-in publicly asked the public companies to volunteer to fund the games.

Activities related to corporate social responsibility have been hit as well. In early August, villages in North Chungcheong suffered severely from flooding. Generally, conglomerates that care about their social images quickly offer donations and dispatch volunteer groups to help the region, but there were no offers on this occasion.

“Ordinary funds can be easily mistaken as bribes these days,” said one of the executives at a company who asked for anonymity. “It is very tricky to execute the planned budget. It seems like the amount of donations will increase in the latter half, but in terms of the full year, I believe the donations made in 2017 will be the smallest in the last two to three years,” the insider added.

Samsung and SK Group have decided to get approval from their board members when making donations of more than one billion won. Hyundai Motor and LG Group are also considering implementing a similar policy.

Even if a company makes a donation using methods other than offering cash, it is also their responsibility to pay up an excessive amount of tax that comes afterward.

“The government has to stop luring in companies to their own public-run events,” said Lee Young-jo, a professor at Kyunghee International College who has expertise in political science. “Companies have to also be able to reject such offers, citing regulations and policies in order to prevent unnecessary misunderstandings,” he added.