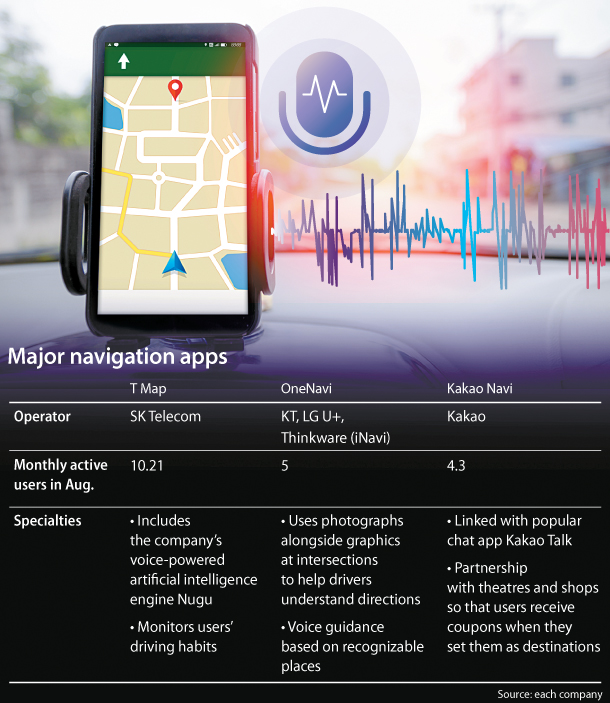 Competition in the local navigation app market is heating up as SK Telecom became the first company to apply voice-powered artificial intelligence to its platform, T Map.

KT and LG U+ hoped to turn the tables by combining their separate navigation apps to create a single program, One Navi, in July. Kakao, the other major player in the navigation app market, spun off its mobility businesses into a new unit, Kakao Mobility, last month.

But SK Telecom is the only company to add its voice assistant to the navigation service so far, an important innovation that allows drivers to interact with the app without taking their hands off the steering wheel.

“Now the navigation not only guides you through your drive, but also offers a package of services including daily schedule checks, weather forecasts, and music streaming that we would like to call a ‘car life service,’” the mobile carrier said in a statement Thursday.

According to SK Telecom drivers will also be able to send simple text messages or call friends using voice commands from within the T Map app by November. The company is also in talks with Starbucks to enable Siren Orders, a remote ordering system, to work through voice commands in the app.

KT and LG U+ are scrambling to bolster their One Navi app, created in partnership with Thinkware, a local company behind standalone navigation device iNavi.

As the majority of KT Navi and U+ Navi users switched to One Navi, the new app started off with 4 million monthly active users, instantly becoming the second largest in the market.

The companies plan to introduce a 3-D map service by the third quarter of this year and add a voice-powered AI assistant to the app.

As of August, the new app is operating with 5 million monthly active users, according to figures from LG U+, still a long way behind SK Telecom but ahead of Kakao.

Kakao, which started off as a chat service provider, has been extending its business into different areas using its IT infrastructure. It even established Kakao Mobility last month to bolster all mobility-related business including Kakao Taxi, Kakao Driver and Kakao Navi.

Kakao Navi, which is based on Gimgisa, a popular navigation service that competed with T Map before it was acquired by Kakao, has been growing fast based on its strength in the chat service and mobile commerce business.

Kakao Navi data can be shared via Kakao Talk, so friends can share destinations while chatting, and Kakao has inked partnerships with various retail chains and content providers to offer discount coupons given to drivers when they set certain stores like E-Mart as their destination.

Kakao also hopes to apply its AI system Kakao I to the navigation app.

The major reason that firms are putting so much effort into upgrading the navigation apps is because they are one of the most effective ways to collect data, which is crucial for future business models like autonomous cars.

“Geographical data is very important for the autonomous and connected car market,” said Moon Jung-yong, head of the platform service division at KT.