Moon and Abe agree to a truce on historical issues friction

Moon and Abe agree to a truce on historical issues friction 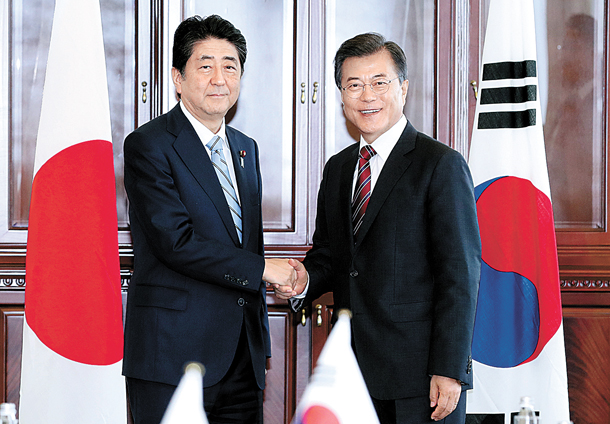 Korean President Moon Jae-in, right, and Japanese Prime Minister Shinzo Abe have a meeting on Thursday in Vladivostok on the sidelines of a regional economic forum hosted by Russia. [YONHAP]

Leaders of South Korea and Japan agreed Thursday to put aside bad blood over historical issues to focus on a united response to the North Korea nuclear and missile crisis.

President Moon Jae-in met with Japanese Prime Minister Shinzo Abe in a bilateral summit on the sidelines of a regional economic forum in Vladivostok, Russia. They talked for 50 minutes on pending issues, including the Kim Jong-un regime’s latest nuclear test and a series of missile launches.

“Amid escalating tensions in Northeast Asia due to the North’s nuclear and missile provocations, the two leaders agreed to stably manage the history issue between the two countries and strengthen future-oriented and substantial exchanges and cooperation,” Yoon Young-chan, senior presidential press secretary, said.

“This means that the two countries should not be held up by the issues of the comfort women and forced laborers to resolve imminent problems [the North Korean threats],” a senior Moon aide said.

“They agreed that the two countries must manage pending issues from a future-oriented perspective. This means it is undesirable to reignite controversies over Japan’s wartime past or highlight them as the biggest bilateral issues.”

In the past, Moon has been an advocate of reparations being paid to the Korean victims of Japan’s wartime sexual slavery and labor conscription, rejecting Abe’s argument that the issues were settled by the Korea-Japan normalization treaty in 1965.

In a press conference on Aug. 17 to mark the 100th day anniversary of his presidency, Moon made public his doubts on the controversial deal agreed in 2015 between Seoul and Tokyo to settle the comfort women issue, hinting at a possible annulment. He said Koreans subjected to forced labor during World War II and colonial times have not been fully compensated by the 1965 treaty.

Moon is putting aside those issues as Japan’s cooperation is needed with the North Korean threats. In his opening remarks before the summit, Moon said, “Korea-Japan cooperation has become more desperate than ever to resolve the North’s nuclear issue.”

Abe also said that close cooperation between Korea and Japan and among Korea, Japan and the United States is necessary to resolve the crisis. Asked if Japan agreed to stop provocative remarks and actions of its politicians and officials, Yoon said, “It seems that some consensus was made on new arrangements during the summit, although I do not have specifics.”

During their summit, Moon and Abe agreed to use maximum pressure and sanctions against the North - instead of seeking dialogue. They agreed to push the United Nations Security Council to adopt an oil embargo on the North. Joint efforts to persuade China and Russia, the North’s allies who are not expected to cooperate with an oil embargo, were also agreed to.

It was Moon and Abe’s second summit since a first meeting in July on the sidelines of the Group of 20 conference in Germany. Since Moon took office in May, Moon and Abe have had six phone calls, largely to address the North Korea issue.