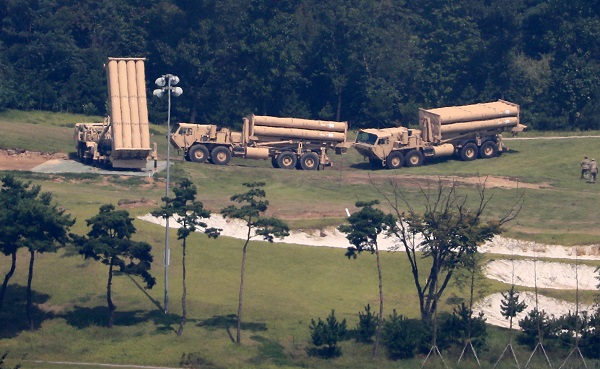 The Ministry of National Defense said Thursday that four launchers for the Terminal High Altitude Area Defense (Thaad) antimissile system were moved to a U.S. base in Seongju County, North Gyeongsang, completing the deployment of the American antimissile battery.

The ministry made an official announcement that the four launchers were temporarily installed based on an agreement with the United States to use the system to project the people from threats by North Korea.

Thursday’s installation of the four launchers completed the deployment of a Thaad battery. A Thaad unit typically consists of six launchers, 48 interceptors, a fire control and communications unit and radar. Two launchers were installed in Seongju in April.

“With the deployment of the four launchers, the U.S. military secured the field operation capability of one Thaad battery,” said Moon Sang-gyun, spokesman of the National Defense Ministry. “We will make necessary preparations to use the capability as soon as the internal procedures are completed on the U.S. side.”

Tensions grew as 500 protesters, including local villagers and anti-U.S. activists, gathered outside the base Wednesday evening to try to stop the deployment. They used about 30 vehicles to block the road and about 8,000 South Korean police troops were dispatched to the village to remove them.

Just before midnight, the police started an operation to end the protest. After five hours of scuffles, the police managed to break up the demonstration around 5:20 a.m. on Thursday. About 30 people, including 20 protesters, were injured and sent to nearby hospitals.

After clearing the protesters from the road, the police towed away the vehicles parked as obstructions and the road was accessible around 7:35 a.m., shortly before a convoy approached the area around 7:50 a.m. Ten vehicles from the U.S. military carrying the launchers and construction materials entered the base at 8:20 a.m.

A South Korean military official said the U.S. Forces Korea will start construction work to link power supply cables to the six launchers, radar and control system. Until now, the system was powered by mobile generators.

Seoul and Washington agreed on the deployment of a Thaad battery in July 2016. Components of the Thaad battery arrived at the U.S. military’s Osan Air Base on March 7 and a radar system and two launchers were installed on a former golf course in Seongju on April 26 – less than two weeks before the May 9 presidential election that brought Moon Jae-in to power.

Shortly after he took office, Moon halted the deployment and ordered an environmental survey to boost the legitimacy of the process. But after North Korea fired intercontinental ballistic missiles in July, Moon ordered aides to start discussions with the United States on deploying four additional mobile Thaad launchers.

The Ministry of Environment on Monday cleared the way for the U.S. military to complete the deployment, announcing that a summary study found no safety problems.

China and Russia have fiercely protested the Korean government’s decision to allow the U.S. deployment of the advanced antimissile system, complaining that its powerful radar can be used to spy on their territories. China has taken widespread economic retaliation against Korean companies.

Defense Ministry spokesman Moon said Thursday that the Moon administration informed China and other countries through diplomatic channels in advance about the plan to complete the deployment.