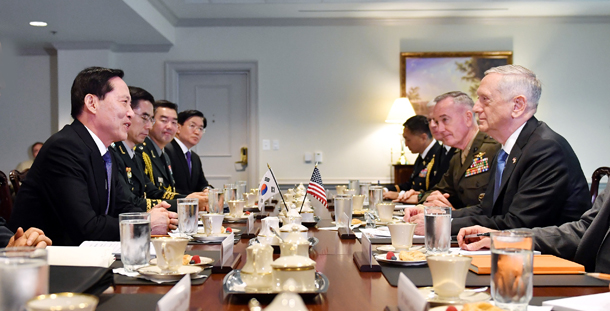 The ruling Democratic Party lambasted Defense Minister Song Young-moo after he said it could be one option when a lawmaker asked whether Seoul was considering bringing back U.S. tactical nuclear weapons for deterrence against the escalating nuclear threat from North Korea after its sixth nuclear test.

Some cursed and demanded he be sacked for making a comment that goes against President Moon Jae-in’s commitment to make the entire Korean peninsula nuclear-free.

But Song, in charge of defending the nation, is not wrong.

Once North Korea perfects the technology needed to fit a nuclear weapon onto an intercontinental ballistic missile (ICBM), we have no other option but to go nuclear ourselves or borrow nuclear weapons from the United States. DP lawmakers are vehemently against the idea.

They claim having nuclear arms in the South undermines its assertiveness to denuclearize the North. But their opposition has a deeper history. One of the prized achievements of the democratization movement, which is their political roots, was removing U.S. tactical nuclear weapons from the southern territory 30 years ago.

During the height of student protests against the military regime in March 1986, popular banner cries had been “No war, no nukes, Yankees go home.” At the time there were over 500 tactical nuclear weapons deployed in South Korea. The left-wing group National Liberation (NL), which dominated student groups, fanned rallies against U.S. tactical weapons and military presence in the South. Anti-nuclear books by left-wing scholars like Rhee Young-hee became hugely popular among students. Two Seoul National University students attempted to burn themselves in protest to nuclear weapons.

Five years later in 1991, the United States pulled out its tactical weapons and the two Koreas signed a denuclearization pact. NL activists hailed the moment as a success. But as soon as tactical nuclear weapons were cleared from the South, North Korea publicly pursued nuclear weapon development. Today, it is the ninth nuclear weapons state.

We hear fewer anti-nuclear cries from former activists. From their silence, we can only presume that they had been merely opposed to American nukes. To them, North Korea’s nukes are justifiable as self-defense against hostile U.S. policy. After NL members joined the government under liberal President Roh Moo-hyun, the official Seoul rhetoric against North Korean nuclear was toned down to “intolerance” instead of opposition. Roh stunned Washington officials by saying there was a good reason behind North Korea’s nuclear development.

Their views on North Korea and security therefore matter more. They may not bear the same school-day idealism and naïve thoughts on North Korea as in the past, but they still seem to have the conviction that they know and can communicate better with North Korea.

Pro-North Korea roots are of little interest to Pyongyang. The regime is entirely engrossed with the strength and life of the Kim dynasty. Its ultimate goal is to ensure the survival of the Kim regime. The South just gets in the way in its bargaining with the United States.

The NL lineage must change its view. It must fold up its romanticized wishes for peaceful reconciliation with North Korea. As Moon has said, it is more important to force change through pressure. North Korea’s Kim Jong-un will feel the heat if former pro-North Korean activists call for the redeployment of tactical nuclear weapons in the South. All possible pressure must be used to bring North Korea to the negotiating table.