The mood in Washington over the Korea-U.S. free trade agreement has changed as U.S. President Donald J. Trump has taken a step back from his talk last week of possibly terminating the pact.

However, even after reports saying Trump has pulled back from ending the bilateral trade deal came out, the Blue House has remained silent, without any official response.

The Blue House’s lack of reaction is largely because the White House has not yet made an announcement in regard to the FTA, so there is no official position for the government to respond to.

Even when the news broke out a week ago that Trump had ordered his advisers to prepare to withdraw from the trade agreement, the Blue House didn’t respond. 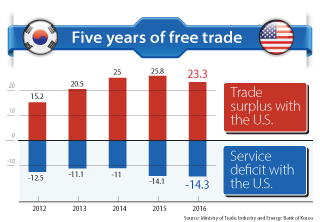 Experts speculate that Pyongyang’s sixth nuclear bomb test conducted on Sunday was the primary cause of Trump’s change of mind.

“Trump has taken a step back on the claims by the U.S. Congress and diplomacy and security experts that terminating the FTA with Korea would have a negative influence on the alliance between Korea and the U.S. at a time when the geopolitical danger has been escalated,” said Sung Tae-yoon, professor of economics at Yonsei University.

Some have argued that Trump wasn’t really planning to terminating the trade deal, but rather using it as leverage for negotiations.

“It is thought that Trump may have used the termination [of the FTA] card with the ulterior motive of backing down on trade issues in exchange for helping Korea out on security as he came to the conclusion that Korea is in desperate need of U.S. cooperation on security as tensions on the Peninsula are rising,” said Sim Sang-ryul, international trade professor at Kwangwoon University.

Although Trump has backed off on the FTA termination, experts say it is still too early for the Korean government to let its guard down especially since the deal can be broken if one side is determined to do so.

In article 24, section five of the FTA, it states that “the agreement shall terminate 180 days after the date either Party notifies the other Party in writing that it wishes to terminate the Agreement.”

This means that Trump can break the deal anytime he wants.

Although the U.S. Congress is opposed to the termination of the bilateral trade agreement, it is not clear if it could actually prevent from Trump’s forcing the termination.

“It seems there’s no legal means for the U.S. Congress to prevent Trump from announcing the termination as the regulations in the U.S. in regards to the notification on the termination of the FTA with Korea are ambiguous,” said Cheong In-kyo, Inha University vice president and economics professor.

“Trump is a strong trade protectionist who doesn’t trust free trade,” said Ahn Se-young, international studies professor at Sogang University graduate school. “He believes that the FTA with Korea hasn’t benefitted the U.S. and therefore he could always bring up the termination of the FTA.”

The only mechanism that would deter the termination of the trade deal is that the following paragraph of article 24 gives the Korean government the chance to request for consultations 30 days after the U.S. decide to terminate the deal.

Local experts say the Moon government has to be more aggressive in the negotiations.

Some of the experts say a pre-emptive move to tweak the FTA agreement from the Korean government could help prevent the bilateral trade pact from being terminated.

“The Korean government has only been using the tactic of avoiding the negotiation itself without other alternatives,” said Choi Won-mok, a law professor at Ewha Womans University. “[The Korean government] needs to express their willingness in the negation.”

Professor Ahn of Sogang University said the Korean government has shown a reluctant attitude every time the U.S. government demanded a renegotiation.

“The social and economic conditions have changed since the Korea-U.S. FTA was launched, making a few changes inevitable,” Ahn said. “[The Korean] government should sit at the negotiation table and give the U.S. what they want and in exchange get what we want.”

Park Sung-hoon, professor of international studies at Korea University’s graduate school, said the Korean government should utilize the growing positive public opinion of the FTA among the U.S. public.

“The opposition of the U.S. Congress in terminating the FTA as well as the [U.S.] businesses positions should be used in future negotiations so that the Trump administration will feel the burden,” Park said.